This year, celebrating Pride Month is going to be a little different for me. Before I get into that, I want to talk about the importance of pride month. We celebrate Pride Month in June in recognition of the Stonewall Riots that occurred in June of 1969. The Stonewall Riots were a result of several police raids that occurred at the Stonewall Inn — a well known gay bar. After the second raid, members of the LGBT community were fed up. The constant police harassment and discrimination was tiring, so they rioted.

These riots jumpstarted a movement that would change the lives of the LGBTQIA+ community today and for that, I’m thankful. June is for celebrating the voices and cultures of this community as well as the support of equal rights for those in the LGBTQIA+ community. Up until this year, I’ve never actually celebrated Pride Month. I never felt like I could. I was raised in a home where being gay was okay for everyone else but not me.

It would make me feel awful. I just want to be me. Who I love shouldn’t affect how people see me. I decided to write my coming out post last year because I was tired of just pretending I was someone I wasn’t. I wasn’t out to very many people and I thought it would be the perfect opportunity. It took a really long time for me to figure out who I was but now that I have, I’m not letting anyone take that from me. I’m pansexual and I love hearts, not parts and I’m proud of who I am.

So, that’s why this year, Pride Month is going to be different for me. I want people to know that I’m proud of who I am. I don’t care what they have to say about who I love. This month is for people like me to showcase the pride we have in our sexuality as well as the community. I will be celebrating all month as much as I can. I hope to take my brother Dante and his boyfriend to their first pride parade, it would be my first too! I’m so excited to celebrate this month!

How are you planning to celebrate Pride Month?

Happy National Coming Out Day! Hey guys, gals & non-binary pals, today’s your day! Remember that there is no “right” way to come out, you do it in your own way when you are ready. Here at Turning Point CT, we just want you to know that your feelings are valid, and you are loved. Remember to be proud and to always be YOU. 🏳️‍🌈❤️⁠

Some Info About National Coming Out Day

National Coming Out Day is celebrated every October 11th. The holiday was founded by Richard Eichberg, a gay rights activist, in 1988 to mark the second anniversary of a march on Oct. 11, 1987 where an estimated 500,000 marched in Washington to for Lesbian and Gay Rights, according to the American Psychological Association.

Today, it is a celebration to acknowledge LGBTQ+ people to raise awareness for their ongoing fight for equality. It is a day with a goal of shining light on individuals within the LGBTQ+ community and their decisions to share their gender identities and sexual orientations with the public. It is a day to also support those who choose to keep their identity a secret.

Everything You Need To Know About National Coming Out Day

I thought this topic would be useful for everyone since (most of) our users are in Connecticut! So post your favorite resteraunts and what city their in! Disclaimer: this is TOTALLY not for my own records *wink*

What weird food do you guys like??
I went to this deli down the street from where I was living for the past 18 months today. Usually the same two people take my order and they are used to my weird sandwich taste! But today it was someone new and I felt the need to prepare her for what I was about to order by saying “this is going to be weird..” haha!!
This is it:
A wrap with lettuce, tomato, olives, avocado, cheese, egg, hash brown, chipotle mayo and hot sauce. And grilled.
She seemed a little horrified.
Then a few weeks ago I ordered a pizza with kalamata olives, caramelized onions, and I wanted artichokes but the waiter told me that was a bad idea haha!! So I just got olives and onions. My brother HATED it!! But I loved it.
I guess I have weird food taste!! Oh well.

It’s no huge secret to my friends or my grandmother that… I’m heavier and I don’t eat the best. But lately I’ve noticed there are days (2-3 at a time) where I will starve myself. Not necessarily out of spite, but because I legitimately either cannot stomach eating normally or do not feel hunger. I’ve also noticed that recently the foods I normally eat (carbs, mostly, so like spaghetti for instance) have begun to make me gag or actually make me physically sick.

I’ve spoken to a therapist about this and she thinks it’s because of my random moments of not eating, period. However it’s… Worrying. Because now it’s influencing my normal eating habits to the point where I can’t stomach it without feeling sick in some way. I see the doctor soon and I don’t look forward to explaining this to him as the last doctor I went to pointed out, “You’re over 200lbs, you don’t have an eating disorder.” Which, well, sent me home in tears.

The TLDR;
Does anyone have any advice on food in general? Or know how to cope with these kinds of things? I’ve yet to find a group for it and… Like I said, I’m getting a little spooked by how my body is reacting these days.

Join us in celebration of National Minority Mental Health Month throughout the Month of July to bring awareness to mental illness and to improve access to mental health treatment among minority groups.

Immigrant groups, LGBT youth, and American Americans are often a part of the most marginalized groups. Some of our forum contributers such as Salmon, Kevin, Sufie and Frankie each shared their stories, which looks into some of the issues that minorities face.

Kevin’s blog also looks at mental illness and other issues from the perspective of a gay, Afro-Caribbean immigrant.

Read Our Stories and learn about the myth and facts about mental illness by clicking this link: https://turningpointct.org/thefactsdisorder/myths-and-facts/

The National Alliance on Mental Illness hopes to bring more people from multicultural or marginalized groups into the conversation on mental illness, create more safe spaces and ensure that everyone gets the right treatment that they need. 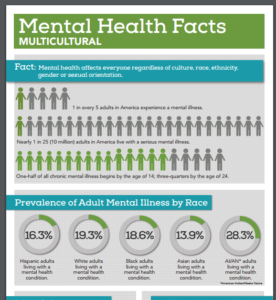 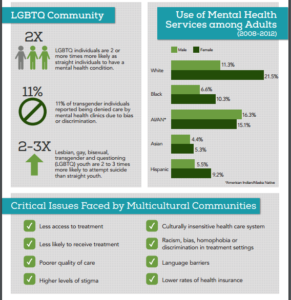 If you would like to find out more about helpful resources, please click on this link or you may click here to find locations in your area that offers services for mental health.

CALL OR TEXT A TRAINED CRISIS COUNSELOR TO TALK:

ALL ARE WELCOME. PLEASE SEE YOUR GSA LEADER FOR A PERMISSION SLIP. 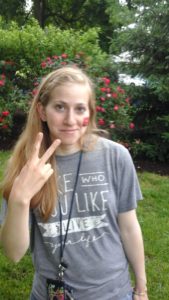 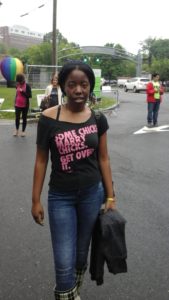