The Stress of Having A New Puppy

Last week, I became an aunt. This week, I became a dog mom to an 8 week old German Shepherd puppy! While becoming a dog mom is extremely exciting, it comes with a lot of responsibility…and stress. There’s creating a structured schedule, house training, and crate training, just to name a few. It is a lot, but even more when there is a blizzard. We happened to get him the night before Winter Storm Bobby. Due to my boyfriend being a lineman, I was pretty much on my own for the first night/day. I’ve never had a dog before, only cats, so this was extremely stressful for me.

I did all kinds of research and the breeder gave us lots of information and tips, but, I was still so nervous and worried about screwing it up. My only experience has been with adult German Shepherds who have already been house trained. My anxiety was through the roof, but I had to step up to train and take care of the pup because I didn’t have a choice but to do it on my own.

The first night, I only got 4 hours of sleep. That made the first day of training immensely hard because I honestly felt like dog poop. My anxiety was through the roof due to lack of sleep. I was being extremely hard on myself because while he was going to the bathroom outside, he was still having accidents in the house. I knew this was normal and to be expected, especially in the beginning, but that didn’t stop me from telling myself it was my fault.

Not only was I trying to train a puppy, but I was also trying to keep up with shoveling the snow outside on my own and we easily got 2 feet of snow where we are. I had to shovel the backyard consistently for our tiny puppy to be able to go to the bathroom comfortably, and I had to keep up with the driveway so my boyfriend could make it into the driveway when he got home (which, there’s no way of knowing what time that could be).

There was one point during the first day where I just completely broke down. I was crying just feeling like a complete failure and texting my boyfriend about how frustrated I was with myself. Even though he was at work, he took the time to remind me to take a break, relax, and that things will be okay. Even when he’s not here, he is still my biggest support system. By now, he knows that I can be really hard on myself, and he has had dogs his whole life so he knows how this whole process can be.

After that, I took some time to compose myself while the puppy took a nap. I reminded myself that puppies have accidents, and it’s not my fault and it’s not his fault either. He is a puppy. After he woke up from his nap, I immediately took him out and he went, I was so happy! I started taking him out as soon as he woke up and anytime he went to the door. We didn’t have anymore accidents that day! I finally felt less defeated and I’m sure he was happy to be able to go outside to relieve himself instead of having accidents.

While having a puppy is a lot of work and it can be really stressful, it is so worth it to put in the time and effort to properly train them and get them adjusted to their new home. The first month is probably the hardest as he adjusts to his new home and gets house broken. Once he gets house broken, I know it will get easier.

He is worth the stress. I mean, look at that face! 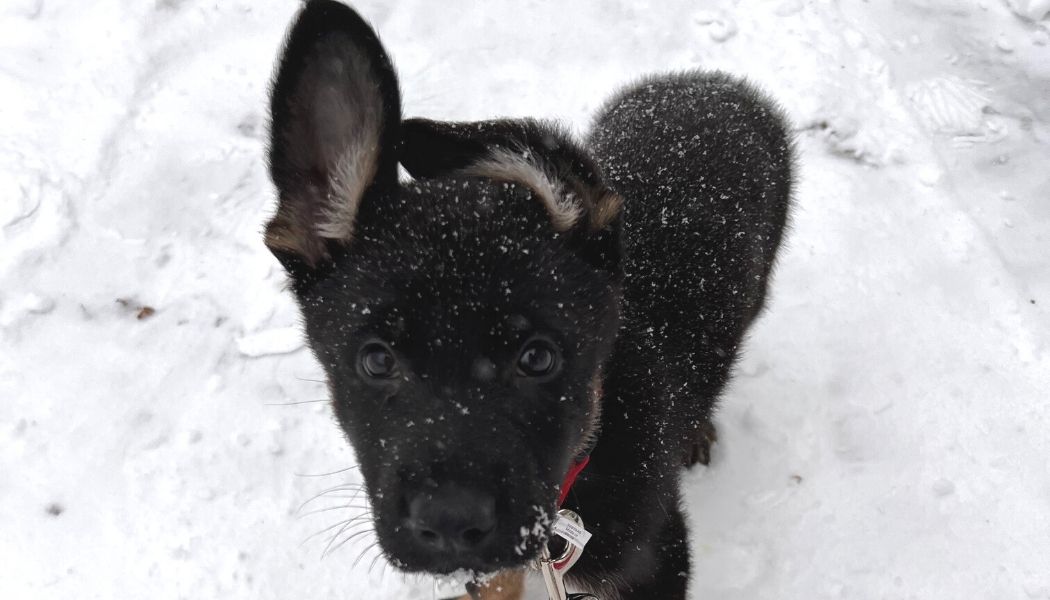