Prom After the Pandemic

I’ve always been nervous about prom. Ever since I was young, I just couldn’t envision myself in one of those dresses, taking pictures, and especially having a date. When the pandemic started, I honestly assumed that we likely wouldn’t have a prom. The prom for the seniors that year was cancelled, and with nobody knowing how long we would be quarantined to our homes, prom seemed out of the question. As my body image became more negative, I doubted I would even feel comfortable enough to go, anyway.

Alas, this year school did open as normal, and in the fall it announced that there would be a prom. As it came closer, people scrambled to find a date to go with. Because we had been in online school since our freshman year, there was not an opportunity for many to explore relationships or meet people through classes. As such, many people ended up going with people they didn’t even know. For a while I feared that this would be my fate too; it seemed like I had no choice. But a few months before the prom, I actually met someone through a mutual friend. We began talking and are now dating, so I was able to get a prom date secured without having to go through the awkward process of asking my friends to play matchmaker, or reaching out to people I didn’t know.

Still, the entire process was strange. My friends and I had never attended something like a prom, as all possible formal dances we could have gone to had been canceled because of Covid. Many people were also nervous about such a big gathering, especially because we hadn’t experienced a party of that size in years. Prom is already a stressful event for a lot of people, and the ramifications of Covid limiting our social interactions over the past few years definitely didn’t help. Many of the people my friends went to prom with ended up separating and going to sit with other people, and everyone mostly gravitated towards the people they knew. It was an interesting experience, and though I am definitely not a prom type of person, I am glad I went.

After the night was over and I had some time to absorb everything, I began to think about the impacts Covid probably had, even after everything had returned to normal. Almost everyone I knew posted pictures on social media, which in itself isn’t abnormal, but the way in which people view its importance has definitely changed. I think because social media was the only way that people were able to communicate or see what other people were up to for so long, it has made social media an even bigger thing than it already was. Because it was what we used to present ourselves for so long, its importance to people has stuck. 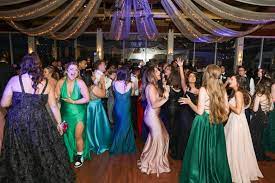