Anyone who knows me knows I love Machine Gun Kelly. To be completely honest, I never listened to any of his music until last year when one of my friends showed me a song she really liked from his new album. I was like hm, I kind of like this, and that led me to explore his music starting with his new album.

For those of you who don’t know, Machine Gun Kelly was solely a rapper, but his most recent album Tickets To My Down Fall was pop punk. And let me say, I love it. My friends have always described me as angsty, so it was perfect for me. And, a lot of the lyrics just spoke to me. People like to joke that Eminem dissed MGK so hard that he changed genres, but like even if that’s the reason…I am totally okay with it. The album is phenomenal.

Anyhoo, I started with that album when I was exploring his music, but I did also explore his music that came before and I did also find a lot that I liked. Once I got a taste for what songs I really liked, I threw them into a playlist that would become my go-to playlist and would later become my depression anthems. I would play this playlist over and over again all throughout the day just to make it through. Most of the days, I was just sitting on the couch staring at the wall, being too depressed to do anything.

The songs helped though because the lyrics and the music helped to improve my mood. I don’t know how to explain it other than I literally felt the music. I felt the music, but it also made me feel something besides the depression (although some of the lyrics absolutely validated my depression). Lyrics that make me feel not alone in my suffering are the ones I cling to, and there are so many lyrics in MGK’s songs that did that for me.

[Interlude: Machine Gun Kelly]
Don’t know why, but it feels like my world is crashing down
I just bought a brand…
Fuck, how much darkness does it take to get this flashy?

[Verse 1: Machine Gun Kelly]
Don’t know why, but it feels like my world is crashing down
I just bought a brand new car, I wanna crash it now

[Chorus: Machine Gun Kelly]
Watch me take a good thing and fuck it all up in one night
Catch me, I’m the one on the run away from the headlights
No sleep, up all week, wasting time with people I don’t like
I think something’s fucking wrong with me

[Verse 1: Machine Gun Kelly]
Drown myself in alcohol, that shit never helps at all
I might say some stupid things tonight when you pick up this call
I’ve been hearing silence on the other side for way too long
I can taste it on my tongue, I can tell that something’s wrong, but
I guess it’s just my life and I can take it if I wanna
But I cannot hide in hills of California
Because these hills have eyes, and I got paranoia
I hurt myself sometimes, is that too scary for you?

[Verse 3: Machine Gun Kelly]
Lately I’ve been sick of living and nobody knows how I’m really feeling
I always hated to smile, but it keep what is killing me hidden inside
I didn’t sign up to be the hero, but I don’t want to wind up a villain
I put my daughter to bed, then attempted to kill myself in the kitchen
Yeah, I should’ve screamed, but nobody listened
So I passed out with the blood drippin’
In this glass house, feeling like a prison

[Verse 1: Machine Gun Kelly]
I wrote this song as a message for help
On behalf of anybody findin’ their-self
I wrote this letter to numb your pain
‘Cause everyday I wake up, I’m feelin’ the same
I got issues just like you got issues
I’ve been hurt, I seen the scar tissue
If I showed you, would you run away?
Do I gotta hide ’em for you to wanna stay?
Do I, even need you? Should I leave you?
Do I, gotta be you, just to please you?
Do I, say I’m all good, when I bleed you
Through my heart? Quit tearin’ mine apart

[Chorus: Hailee Steinfeld]
I shout, I swear, I get angry, I get scared
I fall, I break, I mess up, I make mistakes
But if you can’t take me at my worst
You don’t deserve me at my best

[Verse 1: Machine Gun Kelly]
I keep doing that thing where I’m thinking again
I got skeletons in my closet (Closet)
I got nightmares sleeping again
I gave you my heart, you lost it (Lost it)

[Verse 1]
I thought about
Giving up everything I own and then moving out
I’m a prisoner in this home
I keep my curtains shut, sabotage everything I love
For a temporary feeling that only left me numb, damn

[Pre-Chorus]
Some days, I’m a kamikaze
There’s no way you can fucking stop me

[Chorus]
I can’t look back when the memories look like that
I took the blade out of my pocket, cut the strings that were attached
I’m bad, and they say they that the good die last
My hesitation is the enemy, I guess this is the end of me

[Verse 1]
I sold some tickets
To come see my downfall
It sold out in minutes
I saw friends in the front row
They’ll leave when I’m finished
And the light in my name’s gone
‘Cause the ones who gas you up
Only come around when the flame’s on and
(I gave you my life, oh, oh-oh)
Ayy, fuck it

[Verse 1]
I’m writing you this message just so I can say that I love you
I had to let you know that everything about me was you, yeah
I think it’s time for me to leave, but I’ll never leave you
I just looked at your pictures, so the last thing I did was see you

[Pre-Chorus]
I’m twenty-nine, my anxiety’s eating me alive
I’m fightin’ with myself and my sobriety every night
And last time I couldn’t barely open up my eyes, I apologize

If you liked this post, be sure to check out my post about Machine Gun Kelly’s new album Mainstream Sellout! 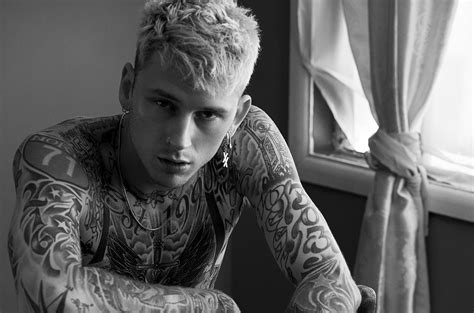