Why I Chose To Be Sober

I drank alcohol and smoked pot when I was younger. It didn’t last long. I had stopped drinking and smoking before I was even 21. I got it all out of my system before I was even legal to drink. I chose to be sober. Part of the reason I had started drinking was social pressures and wanting to fit in, but another part of it was a way to cope with my depression.

I think the first time I had a drink was when I was a junior in high school. I was at a party and someone offered me a Twisted Tea. Everyone around me was drinking so I decided to just go along with it. I didn’t particularly like the taste, but I drank it anyways.

I wouldn’t drink a lot and I would never get blackout drunk or anything (although I knew people who did). I would get just buzzed enough to enjoy myself at these parties with my friends. I really didn’t party that often and I really didn’t drink much.

At some point, I had started to drink alone when I was depressed. I want to say it was my senior year. I was having someone buy me alcohol and I was hiding it in my closet and drinking it at night when everyone was asleep. It wasn’t often, but it was still happening.

When I got into college, I definitely started drinking more. I was drinking harder alcohol, like Fireball and Jim Beam. At this point, I had also started smoking pot. There were times I was taking shots and taking hits from weed pens during work. These were not my best moments.

When I was a sophomore in college, my best friend tried to take her life. While I was at work, she started saying things that were really worrying me and I sent someone to her dorm to check on her. When they got there, they found her unconscious. Thankfully, she survived. But it really, really messed me up mentally knowing that the reason she had survived was because of me.

After that incident, I was really struggling mentally. It was a lot knowing that I had saved her life and I was thinking a lot about what could have happened had I not sent anyone to check on her. It was a lot for a 19 year old to deal with.

The weekend after, I was hanging out with friends and drinking. I had drank enough to have the alcohol effect me and my judgement. This particular night, someone had offered me a pill called Red Bull (I would later find out it was MDMA). I had always told myself I wouldn’t do drugs like that, that I would draw the line at marijuana. But this night, between the internal mental struggle and the fact that I was drunk, I ended up giving into the peer pressure. After several no’s to the offer of this pill, I finally gave into the peer pressure when I was told it would make me happy. He could not have been more wrong.

I spent the night screaming for hours and throwing myself around in a bed. It was honestly traumatic. My hair was in a giant knot once the screaming and flailing finally subsided. My tongue was completely bitten up from grinding my teeth (something I learned was common with MDMA). I felt like like I was in another universe and like a zombie for at least a week afterwards. I never did anything like that again.

My brain was never the same after the MDMA. My depression worsened and I started to have issues anxiety.

There was a reason for this. MDMA releases serotonin in large amounts, which is why many people say it will make you super happy. However, by releasing large amounts of serotonin, MDMA causes the brain to become significantly depleted of this important neurotransmitter, contributing to the negative psychological aftereffects that people may experience for several days after taking MDMA. Anxiety and depression are both results of low serotonin.

After just one time of using it, I had to start seeing a special doctor to try and elevate my serotonin to help with my anxiety and depression. It was a holistic doctor and he gave me several supplements to help with my anxiety, including 5-HTP. Being only 19 at the time, I tried to take them regularly, but I quickly stopped taking them.

While I never touched MDMA again, I did continue to drink and smoke pot. The drinking during work and the smoking during work continued because there were a LOT of bad influences in the plaza I worked. Many of them were older and there was honestly a lot of low-key sexual harassment going on (but that’s a whole different story). I’d go into one store in the plaza and take the free nips they would offer me. After my shifts, I would go drive around and smoke with another person from the plaza. One time I even snuck into a rooftop bar because I was always hanging around with older people. I accepted any free substances that were offered to me because I liked the way substances made me feel. I liked becoming a bit numb.

I did dabble with edibles, but because of the issues with anxiety I started to have, the body high edibles gave me felt exactly how my anxiety felt. I would get tingling and numbness and it was exactly how my anxiety presented itself physically. This would just cause me to actually become anxious and it resulted in me puking every time. It was awful.

Those handful of times with edibles was enough to put me off of pot of any form for good. The anxiety of getting sick was just too much. Around the same time, I also made the decision to stop drinking.

There are a lot of different reasons why I personally chose to be sober. One of the main reasons I chose to be sober is because alcoholism is something that definitely runs in my family. I’ve watched it effect family members extremely close to me. I knew if I went down the route of turning to alcohol every time something went wrong, it wouldn’t be pretty.

I definitely see in myself that I have an addictive personality. I am also the kind of person who takes things too far, especially when it comes to becoming self-destructive. Man was I good at making myself miserable and getting myself into just all around bad situations. I had decided that I wanted better for myself. I didn’t want to become like those family members who depended on alcohol. I didn’t want it to ruin my life.

I was extremely lucky that most of my friends and family were completely understanding. Nobody ever really pushed me to drink, they’d offer me a drink to be polite, but nobody was offended when I didn’t drink. Even on my 21st birthday, I didn’t drink. I had already stopped drinking years before. I did have a couple sips of wine at a restaurant a couple days later just to say I did it, but because I hadn’t drank in years, I was tipsy enough to trip over my own feet.

Since I’ve been legal, I have only used my ID twice to use alcohol. Once, I bought a bottle of wine thinking I would drink a glass with dinner every night like my grandfather, but I never actually touched it. I had no real interest in drinking and I actually have a lot of anxiety surrounding drinking at this point. I don’t like being in a state where I feel like I am not in control of my body. The second time I used my ID was actually last month to buy my cousins birthday/college graduation gifts. I bought them some hard cider from up an orchard up the road from me. Because I don’t drink, I didn’t even know what to look for.

You’re probably wondering why I bough others alcohol even though I don’t drink. Even though not drinking and not smoking is a decision I have made for myself, I do not shame or judge people who choose to drink and smoke. Most of the people I know who drink do not go overboard and they’re able to do it in moderation. They’re able to respect my decision not to drink or smoke, so I respect their decisions. Sobriety isn’t for everyone.

I am just trying to live my happiest, healthiest life. 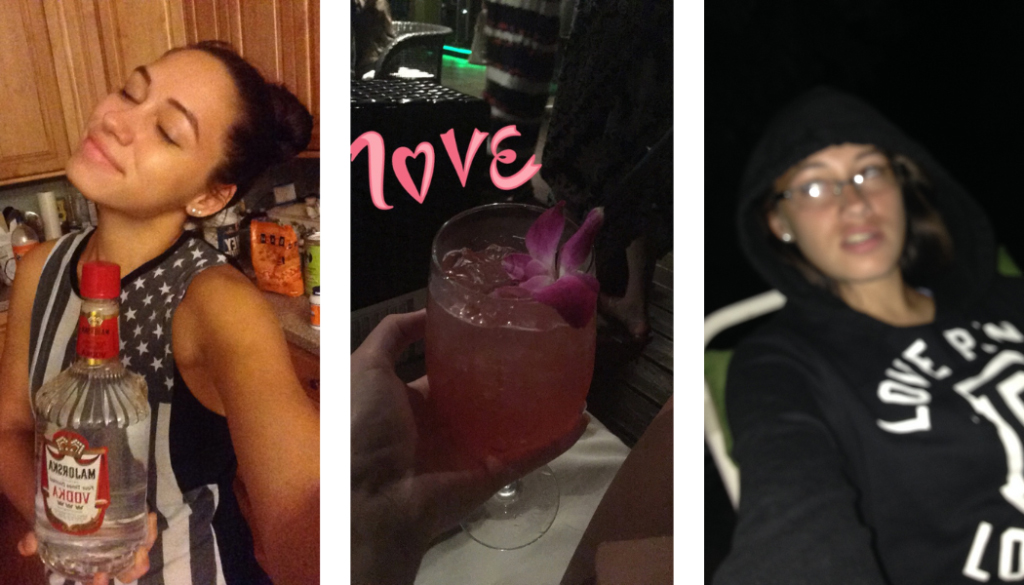