When Stage Fright, Fear, and Passion Become Your Best Friend: Making a Show

When GUTLESS & GRATEFUL premiered in New York at The Triad in October 2012, everything came to fruition. I stopped comparing myself to others and realized that I had stayed true to myself. I was still the same performer I had always aspired to be, but now I was telling my own story rather than playing an ingénue in GUYS & DOLLS. It took more work, with a rockier path, but I was performing theatre that connected with audiences on an even broader level. Total strangers felt like they knew me and offered me their own stories. For the first time, my story was being told in my own words. It was now no longerAmy Oestreicher, the woman whose stomach exploded, but Amy Oestreicher, the actress, expressing her inspiring tale at The Triad. It felt like springboard for even more opportunity and my bridge to the world.

Of course, there were plenty of naysayers. I hadn’t done a show for years. What did I know about producing my own show in New York? It’s natural when someone tells you you can’t do something to think about it a bit. Many times I believed them. I went to auditions with bags attached to me, attended hot yoga daily while connected to an IV pump, and have gotten many funny looks and some awkward situation that embarrassed and upset me. It’s difficult to ignore what other people think of a career move, or a comment that touches on an insecurity. While creating GUTLESS & GRATEFUL, it was easy to compare myself to former colleagues that were doing theatre, but “bigger” and “better” than I was— on Broadway, on tours, seemingly “breezing through” their career.
But I think the most important (and difficult) thing for me was patience. Telling myself that I will get there— this is my own unique path, and as long as I am still doing what I love, in whatever shape or form, I am staying authentic to my own path. I didn’t let food scare me for all of those years it could have killed me, so how could I get stage fright now?

After I performed, I didn’t realize how people would be affected. Not only did they empathize with my ups and downs, they were laughing with me! I connected to the world, and to my own community again, something I desperately needed and what has always drawn me to theatre in the first place.
My first performance at The Triad brought everything full circle. It was a frightening, bold, vulnerable, and breathtaking experience. In it, I told everything: the pain, the joy, the fury, all with music, drama, and humor, most importantly. I had played “roles” before, but for the first time, I was honestly revealing my own medical and emotional struggles for hundreds of strangers every night. It was a risk to lay my soul bare, but the reward was in how my own vulnerability caused others to become vulnerable and moved by my own struggles.
Just before opening night, as my mother helped me get into my red dress, she looked at me, like she looked at her “old daughter” getting dressed for a middle school musical. She slipped my red dress over a new body, battered, bruised, covered in scars, bags and medical tape. But my earrings were sparkling, my eyes were stained with eyeliner—not tears—and now I had tape for my body mic, in addition to my ostomy bag. I was not defeated. This could be a new start.
I walked out on stage, sat at my desk in the downstage right corner that we had so carefully marked down with tape. I was more nervous than I could ever remember and could hardly breathe. The lights were dark, but I could see the glasses of audience members in a packed house. Who was here? As the lights began to brighten, I could recognize friends, family, all waiting to hear me sing…

The crowd was quiet. Jerold, on the piano to my left, started the intro we had rehearsed a trillion times. The band started to play, my brother behind me, and I felt support in a theatre from literally all sides. Here I was, with one chance to prove something, to sing. To make sure my body mic was on…
The intro stopped, and I looked up at the audience to sing, “I’ve an unrest inside me.”

And, boy, did I have an unrest.

From my journal at that time:

October 19: Yay! It went better than I ever could have expected!
October 21: My show is sold out! Heaven! They had to add seats!
October 25: I don’t want this show to end at The Triad. Must get this produced after. So I spend 6 hours sending emails to producers, and I even got a few responses!
October 26: Amazing finish! House was filled, and the general manager said he’d love for me to do an extended run one day! Maybe after surgery. But the biggest surprise of the night: William Finn showed up. I was shocked! On the way home, parents kept saying what a positive experience this all was. I’m so glad. Think of how many people I touched through this!

This wasn’t the path I planned for myself, but does anyone’s life ever work out exactly how they plan it?

My stomach exploded. My world changed in an instant. My life took a detour as all lives do.

So, I made the best of it, and now I have my detour to thank for all the gifts in my life. As actors, we tell stories constantly. I first told mine over six years ago and continue to do so, not only to myself, but to complete strangers and New York Theatregoers. Every time I “perform” what happened to me, I find myself somehow transformed in the process. Theatre has the power to change lives, both for those directly involved and those who watch. Theatre teaches us we’re capable of anything, and usually tells us this at times we need it most.
After my show, people would come up to me and tell me how inspired they had been by my story. They would almost apologize, as if ashamed that their own problems could possibly compare. This always struck me odd because I believe that suffering is relative. Although my situation was extreme, I experienced universal feelings that everyone goes through in life, whether it’s a surgery, a break-up, or a broken heart. Whatever the story, it is ours and uniquely ours and we all have to get it out there. Through telling our stories, we realize that we are not alone. We feel connected by a shared experience, and this experience strengthens us just enough to keep getting through life’s experiences day after day!
This realization I had that we all need to tell our stories inspired me to start leading workshops about the healing power of our stories to organizations, schools, and under-served communities.

This unexpected route has shown me that when life throws you in a different direction…
GO WITH IT.
TRUST IT.
BE NERVOUS. IT’S OKAY.

WHO DOESN’T GET STAGE FRIGHT.

Learn more about Gutless and Grateful at www.amyoes.com/gutless. Now that it’s back-to-school season, I also do the show for schools and colleges!  Check out “Mental HEALth Mindset: www.amyoes.com/student-mental-health and send me a note! 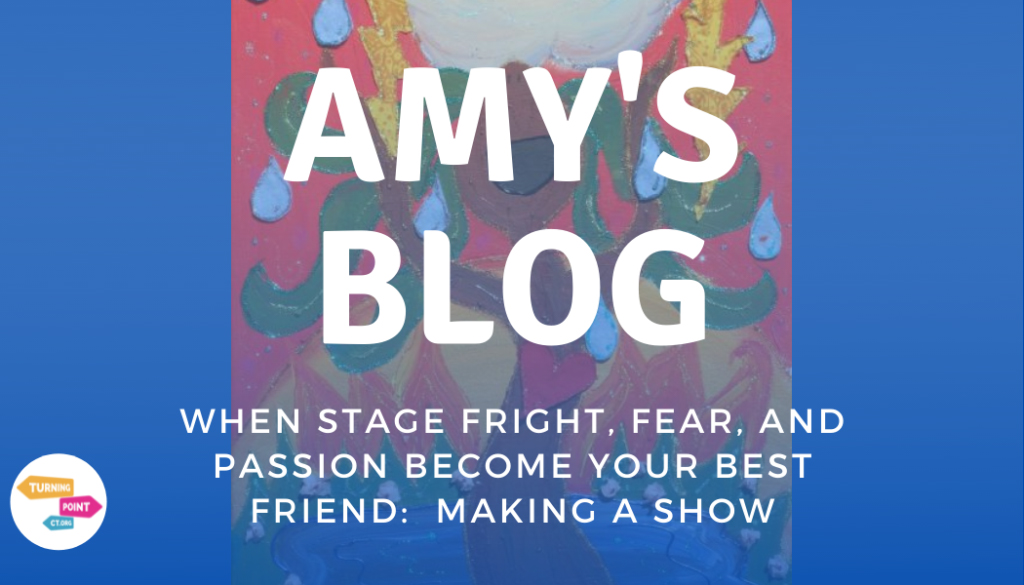