So, I talk a lot about not being able to eat or drink for six years. I even gave a TEDx Talk about it.

So let’s just say, I couldn’t be happier to be eating pizza and performing in cheesy plays I’ve written. For a few years, cheese was something I could only dream of inhaling.

I was your typical well-fed Jewish girl, partial to Chinese food and non-alcoholic Shirley Temples. Nowhere in my teenage view could I ever had anticipated a coma right before my senior prom, and months later, being awoken by doctors who solemnly shook their heads and shrugged as they said, “You can’t eat or drink right now. And we don’t know when… or if… you’ll ever be able to again.”

When surgeons miraculously reconstructed my digestive system, food was a thrilling discovery. A lot of people ask what the first thing I ate was. Believe it or not, I brought a little frozen waffle with me to the doctors. A mini one. For some reason, I REALLY wanted to have a frozen waffle. So I had a bite, and then I realized I had to start with baby food.
Oh well. Nothing is as glamorous as it seems.
Have you ever had something in your life that you’ve really looked forward to and then you found out it wasn’t that great? That you realized maybe you overrated a bit?
Well, that actually wasn’t the case with food. Food is NOT overrated one bit!
In fact, perhaps I had underrated it’s potential…

Pizza and me: A life-story

It took a really long time to work up to pizza, and I was terrified. I thought I was going to choke. I was afraid of the texture, the heat of the melted cheese (I’m drooling right now) and the tang of the tomato sauce.
How was I supposed to chew all of that grainy cheesy goodness?
I remember staring at my flimsy paper plate a REALLY long time, and then my friend said, “well why don’t you just eat it already?” (Not the plate, you get the idea.)

So I pick up the piece of pizza and took a bite. And I seriously went crazy. In a good way, of course.
I remember that the first thing I did was take a walk outside and call my brother. I was so giddy and flustered, rambling on,
“Jeff, you never would believe what I just did! I had pizza! No, you don’t get it, like now that I can eat pizza, I can do anything! I can go out to lunch with friends and say, hey, you wanna go out for pizza or something? I can go to a diner and be like, hey I’d like to order pizza! I can call some buddies and be like hey, let’s have a game night and we’ll take in some pizza! I can go on double dates at a pizza joint! I can have a pizza party, heck — I can make my own! Once I can eat pizza — the world is an open door!”
I’m not joking — I really said that. And more, I really believed that.

The Power of Food

It’s hard to understand what food does. It’s more than just keeping you full. It’s a lifeline to the world. It’s social, it’s casual, it makes you feel like a person. It puts a physical sensation into your body that otherwise makes you numb.
Food opens you up to yourself and to the world again.
But I was still on the phone: “Jeff — no serious, you really don’t get it! Like, it’s portable too! So I can just be like, oh, I’m grabbing a slice of pizza on my way out. Or hey, I’d like a slice — or TWO — to go! And I can just eat it and watch a movie, or split a pie with

I had been through the struggles of someone three times my age, but I felt like a baby and everything felt new. I was so scarred and weary, but I was still somehow ready to start out fresh, and ready to heal.
And it started with pizza.
Once I could eat, of course a few surgeries later I couldn’t eat again. That’s the phase of my life when I became obsessed with cooking so I could still have contact with food. And my favorite thing to make was deep dish pizza. Staying connected to food made me feel again — even though it hurt and was terribly difficult. The smell of my pizza cooking in the oven made me cry, and the tears felt like home.
Maybe those tears are what gave me hope that one day, I really would be able to eat again.
Cooking gave me hope. And apparently hope helped, because now I eat way too much pizza, let’s just say.

What’s better than a homemade deep dish pizza? Gratitude. For pizza. With extra cheese.
These days, with me and pizza, it’s love at first bite.

So think about it, take some time for gratitude, and to call your local delivery man. The next time you take a bite of pizza, of cheese, of life, really think about how wonderful it tastes, what doors it opens, and how wonderfully it feels to be alive!
It’s cheesy, but it’s true.

I’ll be performing an original monologue..ironically about NOT being able to eat, at Plays and Pizza, a night of short plays at Lucky Jack’s Bar, with special guest Norman Zamcheck on Piano and free pizza after the show. 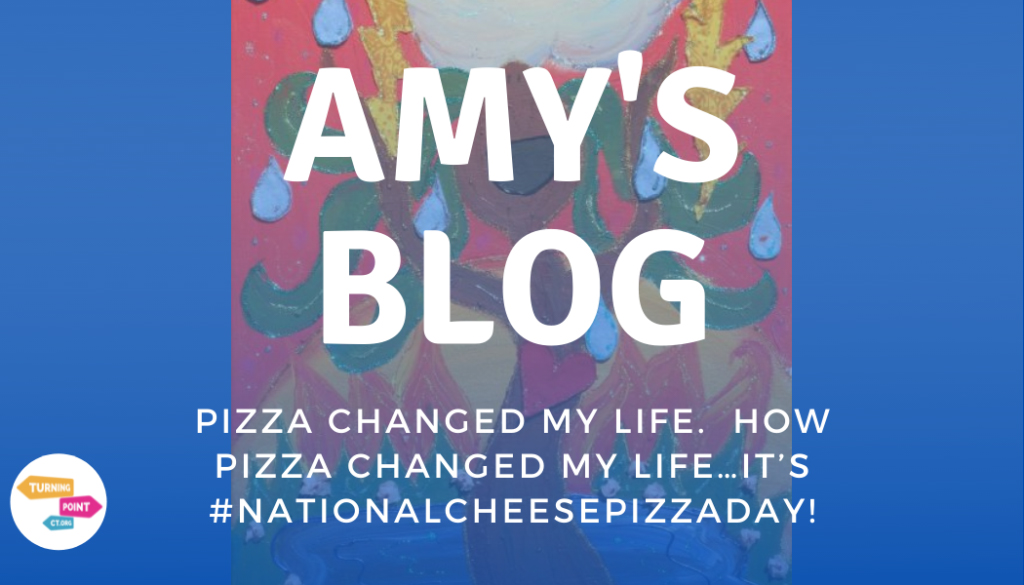