How I Found the Courage to Heal on My Detour

Healing takes courage, and sometimes it takes a friend, a therapist, or a book!
How have you made it through each detour of healing and recovery? Where are you now?
This was a book that helped me start…

Well, I’ll start with how I found the book.

My life was out of control. I called a therapist.

She listened to my flustered ramblings, then calmly replied, “You have to tell your story”.

“Yes, you have to say in words what happened to you.”

I hung up and never talked to her again. She was oversimplifying things. I’m used to “thinking” myself out. I didn’t know why I actually had to verbalize it. What could words do?

I spent a few months pretending everything was okay, but it wasn’t. Then I thought, what the heck, I’ll say it. I tried, but I couldn’t speak.

At that moment, I knew the therapist was right. Until I could use the power of words to express what happened to me, I would not heal.

It took years before I could even articulate an idea of the turmoil that was rattling around inside of me. The confusion, the pain, the anger – the losses. I all kinds of journals, you know, the kind you see at Hallmark with the pretty covers and the inspirational quotes, like a compulsion – believing there would come a time when words would flow through me and guide me back to my self.

And one day, I took one of those journals. I opened it. And I began to write:

“April…Oh I don’t know.
Things are good – I’ve been doing a lot of auditioning, I’m even performing!
And, now that I have an agent, I’m taking the train in to the city for auditions – by myself…’cause I’m a woman now!

It’s great – I’m really getting to know the showbiz crowd and feel like I have mentors in the crazy business – people I really trust. I think…”

Then shortly after that, I had some time to kill before an audition last week so I went to the bookstore. And I was browsing the Healing & Spirituality section – I needed some inspiring poetry to pep me up because I don’t know, I’d been feeling really drained – and thought that maybe that’s just what this business does to you –

I picked up each book unenthusiastically.

“You Can Heal Your Life.”
“The Artist’s Way.”
“The Courage to Heal: For survivors of sexual abuse.”

I almost laughed, put the book back, walked away… and then came back, started to slowly flip through the pages. I sat down, slowly, glued to the pages.

Those were words that belong with plane crashes and gang rapes and armed robberies and dateline specials. In Fairfield, Connecticut, there’s stress for final exams, or a fight with my drama-queen friends.

(I looked around nervously, then continued to read.
“Check all that apply:
I feel dirty, like there’s something wrong with me
Sometimes I think I’m crazy
I feel ashamed
I’m different from other people
If people really knew me, they’d leave
I have a hard time taking care of myself
I don’t deserve to be happy
I’m a failure
I can’t cry anymore
I feel as if my body is separate from the rest of me
I feel numb.”

That’s…my story. Numb. That was the word. The soft b felt tingly on my lips as I swallowed up that word in terrifying secrecy. Numb. That is how I felt. Like my body was physically going through the motions of everyday life, but the me I knew my entire life was not a part of it. It was as though I determined to remain in denial.
When I turned 17, a mentor who I had known for several years transformed into a complete stranger. One night I had come to his studio for a voice lesson. I went into total shock and coped by leaving my body and staying numb when he started to molest me.

By the end of the night, I couldn’t remember a thing that had happened. When I woke up, my voice teacher did not go back to who I thought he was. I stayed numb. For months. And months. Suddenly, all I could feel were my feet pacing back and forth over the endless passing of days.

Out of control. Until I could speak it. And…the therapist was right.

And then I was in a Barnes and Noble somehow holding an impossible book. Courage. Heal.

Nervousness rushed over my body, like I’d just been caught shoplifting. The warmth that filled my cheeks was a peculiar heat I hadn’t felt since I had last laughed, or smiled. Words had the power to pierce through my skin with more potency than my fingernails, now rattling with uncontrollable energy.

So that’s my story. And… I had never actually told anyone before.

Just this book. Because this book told me.

So I guess I healed through stories – literally. Because two stories talked to each other.

Sometimes you need other people’s words until you can fill in your own.

Of course, some people like to fill in their own words for me. They always will. But, finding that book, The Courage to Heal, a decade ago, I found words. That’s all they were. It only became a story once I read them, and wrote out my own. I realized the value of my story once I was able to read it, and ultimately write it for myself.

But finding that book, I found music – more than words. A connection to the world. Everything was possible. I had a story to tell. And with a story, anything could happen. Even the good things…

Has a book ever inspired you on the next steps of your detour? Share it!
And safe, safe travels, Detourists! 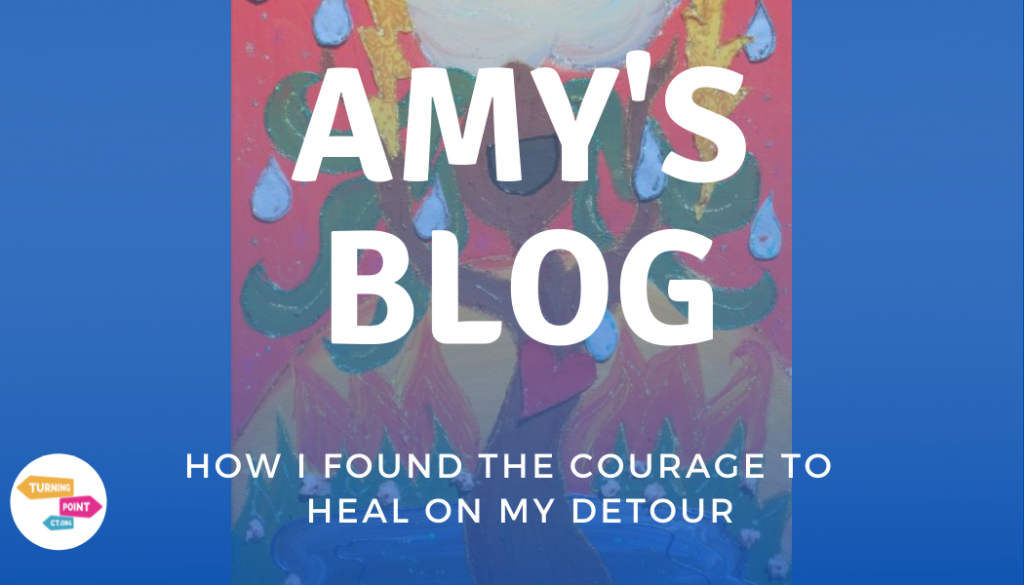