Keeping the Rhythm You Gave Me

One of the most magical things about dancing is getting to feel the music in your body- truly feeling each note vibrating through your soul. I know that you don’t have to be a dancer to feel that way about music. Some of the Earth’s inhabitants can simply listen to a song and empathize with the emotion that the artist was feeling when they wrote it.

Those kinds of people are special.

Music has shaped and created my world in so many unique and wonderful ways. Sometimes, simply hearing the first few notes of a song allows me to travel through time and space and take on the emotions I was feeling the very first time that song resonated with me. My favorite memories are associated with music.

At 7-years-old, I was given the gift of the album that changed my life. M!zundaztood is the second studio album that P!nk released, and it’s the first studio album that made me feel. At 7, I was able to identify with things that P!nk, a 22-year old, was singing about. Not fitting in. Being misunderstood. Hating yourself. A broken family.

These incredibly heavy and heart-wrenching topics that an adult was singing about, I understood. I identified with. I finally felt like there was someone in the world who knew exactly how I felt in my most depressive state. M!zundaztood got me through my darkest hours. The more I learned about P!nk, the more understood and important I felt. At 27, she was writing things that made people listen. She didn’t care who she was pissing off. If she had something to say, she was going to say it. I needed someone to show me that speaking your mind is GOING to make you stand out, it’s GOING to piss people off, and it’s GOING to make a difference in this world. P!nk was (and still is) that someone.
For the next 7 years, I survived my darkest days by listening to M!sundaztood and I’m Not Dead tracks on repeat for 24 hours straight.

Her words made me trick myself into believing I was strong, until I actually became that strong person I was imagining. She was putting words out into the world that were encouraging girls (just like me) to embrace their differences and to stand up for what they believe in. I was so proud to sing at the top of my lungs,

“I’m so glad that I’ll never fit in. That will never be me. Outcasts and girls with ambition- that’s what I want to see.”

And then, in August of 2008, my beautiful idol gave me another gift.

She gave me So What?

“So What? What do I have to say about So What? Sooooo what??” she says about the track.
Insert image of a 14-year-old high school freshman just trying to survive. Oh, wait. I have that exact photograph.

There I am. Age 14. Trying to fit into a world in which I was meant to stand out. I spent many of my 14-year-old days alone, in my room, imagining a version of myself that was impossible to maintain. I was angry. Sad. Alone. Scared of what I was going to become as I entered (and lived through) the high school phase of my life. I was intimidated by everything and everyone. I was bullied by kids I thought were my closest friends. It was hard to get out of bed most of my high school days.
But I always had P!nk with me.

If there were ever a time in my life when I needed to pick a theme song for myself, it would be So What?
14-year-old me lived and breathed So What? (In her defense, 23-year-old me still lives and breathes So What?)
I am eternally grateful that P!nk gave me (the whole world really, but I know it was just meant for me specifically) that song and the attitude that so fittingly goes along with it. There’s just something about So What? that can cure any kind of bad day/ailment/chronic pain that I will ever suffer. So What? is exactly that. So what your day sucked? So what someone was mean to you? So what you didn’t finish your to-do list? So what that mean girl in your class made a nasty comment towards you?

For Alecia Moore, more affectionately known as P!nk,
thank you for encouraging me to find the strength I had so deeply hidden inside of me. Thank you for giving me someone to look up to, someone who doesn’t care what the press or the rest of the world thinks of her. Thank you for explaining how terrified you were to be a mother, since your mother always wished you a daughter just like you. Thank you for teaching your daughter, “We don’t say mean things and we don’t say things we don’t mean”. Thank you for all of the good you have done for this world. Thank you for putting into words the thoughts that I couldn’t. Thank you for understanding. 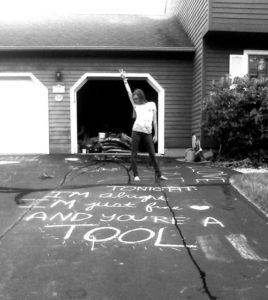