A Full Pardon: From Convict to Coach

2022 closed for me with giant envelope waiting for me in my mailbox. It was from CT Board of Pardon and Parole; a certificate I had been waiting for… a full pardon!

From 2010 to 2014, I was convicted of multiple felonies and misdemeanors. They were all related to narcotics, the use and sale. On April 1st in 2014, I served a little under a year in prison. Upon release, I was unable to sustain recovery and wellness, resulting in a relapse. Clearly, incarceration did not rehabilitate me.

The Journey to Eligibility

For the past 8 years, I haven’t been re-arrested or re-incarcerated. Although I relapsed, I was thankfully not part of the statistics of recidivism. Having a record has prevented me from varies types of employment, caused rejection of housing applications, and has prevented me from sharing my stories in various institutions.

The looming feeling of knowing that I have a record haunted me. Although I’ve turned my life around and use my experience to help others, I still live with my own stuff. There were many moments where I would pause and say to myself, ‘You can’t do this, you’re still a convicted felon’.

When I became eligible for a pardon, I looked at the application and process of it. All of it seemed so overwhelming, so I would often completely shut down and think, ‘I’ll try it again another day’.

Applying for Full Pardon & What it Means

One morning I decided to look at the process and break it down into a process that would work better for me as an individual. After doing that, I started to notice that completing this application was possible, I just needed to follow through with it. So, I went through each step carefully and spent 3 months working on my application before submitting it. Once submitted, I let go of the outcome and was proud of myself for at least trying.

I wouldn’t know the results of the pardon unless I applied, so I needed to go for it, or else I would never know how it could have turned out. I’m so grateful that I applied. It was a 5 month process. It was worth it because I received the best news of being granted a full pardon.

This means, legally I can say that I’ve never been arrested or incarcerated. Although my story is public, there is a way to still know that I have a history. But on paper, I’m all set and clear. To me, that’s what mattered.

Had I not taken the chance on myself at this application, I wouldn’t be able to type that I received it. It truly felt as if that chapter of my life could close a little more. Many people have said to me, ‘now you can close that chapter’, and although I can resonate with that, I will never fully close that chapter. To be honest, it’s kind of ridiculous for people to assume that I can one day.

The Impact of Incarceration

The experience of incarceration will never leave me. I’ve done various forms of treatment. To say the least, it’s more manageable to keep in my memory. And not eliminated; I’m ok with that. I use my experiences to help me connect with people who feel trapped in life. People who are about to be incarcerated or those who were released. Especially to advocate for a better justice system. To forget and close completely would be foolish in my career.

Also, PTSD is real. I can do therapy, holistic remedies, EMDR, etc., but all it takes is one smell/sight/sound/taste/touch that could bring my body right back to that time. Feeling unheard or experiencing feelings of entrapment, I experience how it feels to be an inmate again. Being surrounded by unethical systems bring me back to being an inmate. Listening to providers push the long term effects of incarceration to the side impacts me. It brings me back to being an inmate.

When this happens, before my pardon, there would be a belief of, ‘I’m still an inmate’. Now, I’m able to remember my pardon and tell myself, ‘I am not that anymore, but I can use my knowledge and experience to make this manageable’.

If you are in CT and you are looking to get a pardon, let me know! I would love to sit with you and help you through this process! 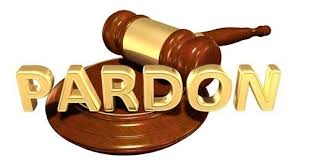