Maternal Mental Health Awareness Day/Week/Month focuses on the mental health of mothers who are going through childbirth.  At least 1 in 5 new mothers go through some sort of anxiety disorder regarding childbirth in many countries.  The illnesses often go untreated which can have long-term consequences to both the mother and the child.

Anxiety disorders can be developed by women who are from many different backgrounds such as culture, age, ethnicity, etc.  Symptoms of such disorders can be seen any moment during a mother’s pregnancy as well as the first year after childbirth.  Effective treatment options are available to help mother’s recover.

Every month there are awareness days that celebrate and recognize different things relating to mental health and advocacy. Have you ever wondered when all those awareness days are?

If so, check out ours below! Scroll down to find it!

Download the PDF or save the PNG to your desktop. Print it, share it, and enjoy it! #YouAreNotAlone

So, if you ever have felt like you are the only one experiencing your struggles, you are not alone. These awareness days exist to remind us of that fact. Together, we are strong. Love yourself, spread awareness, and fight stigma.

Make sure you are following us on Facebook and Twitter to see our posts on each awareness day. You can also find out if there are any events happening in honor of the days.

Did we leave out any awareness days that you want us to include? Or, do you have any suggestions? Then let us know in the forum!

You can scroll down for the PDF!

And scroll down for the PNG! Hint: you can save these by dragging them to your desktop. If you are on your phone hold down your finger and save the picture!

Here is the entire calendar, month-by-month in PNG form:
January 2019: 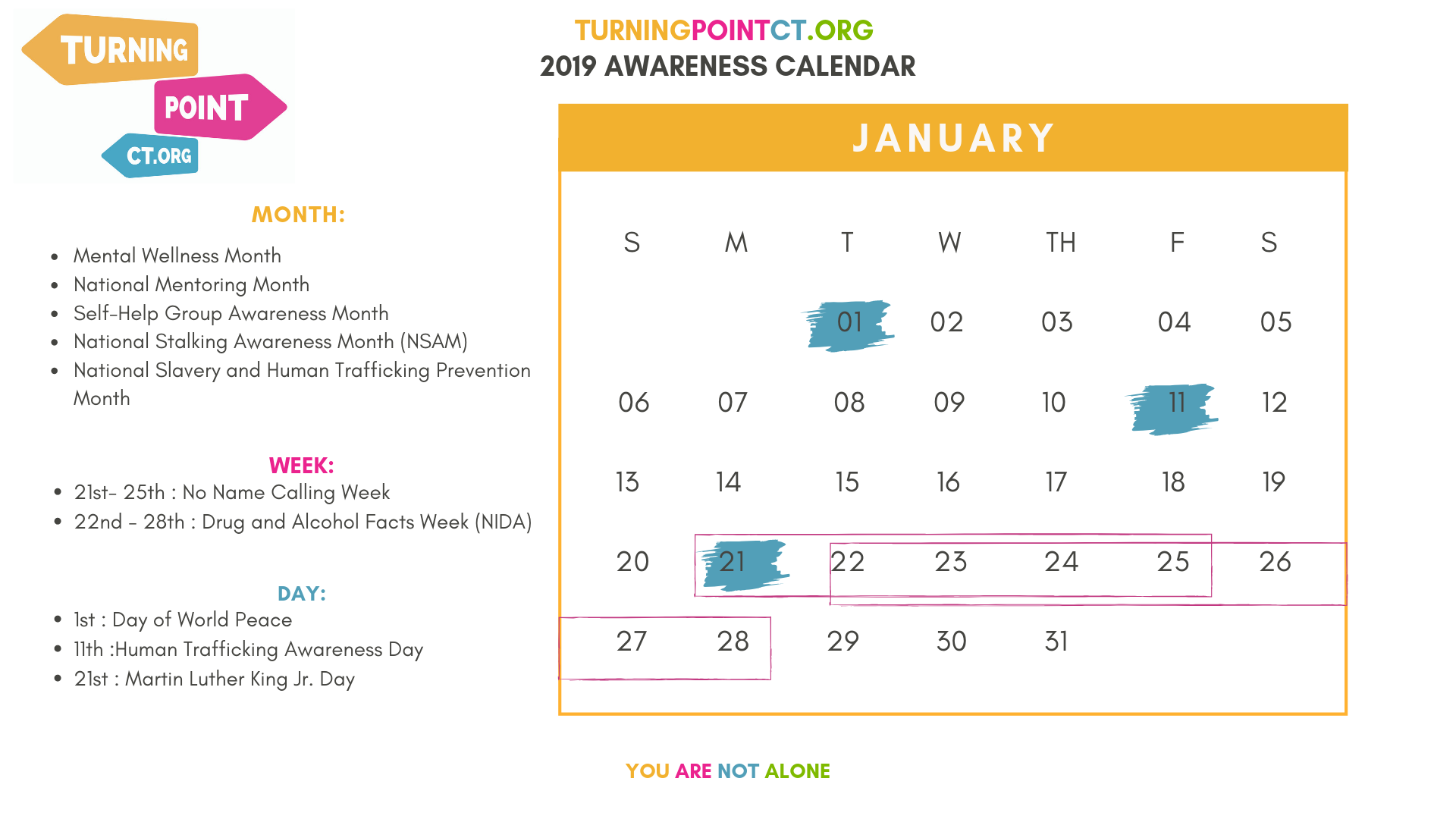 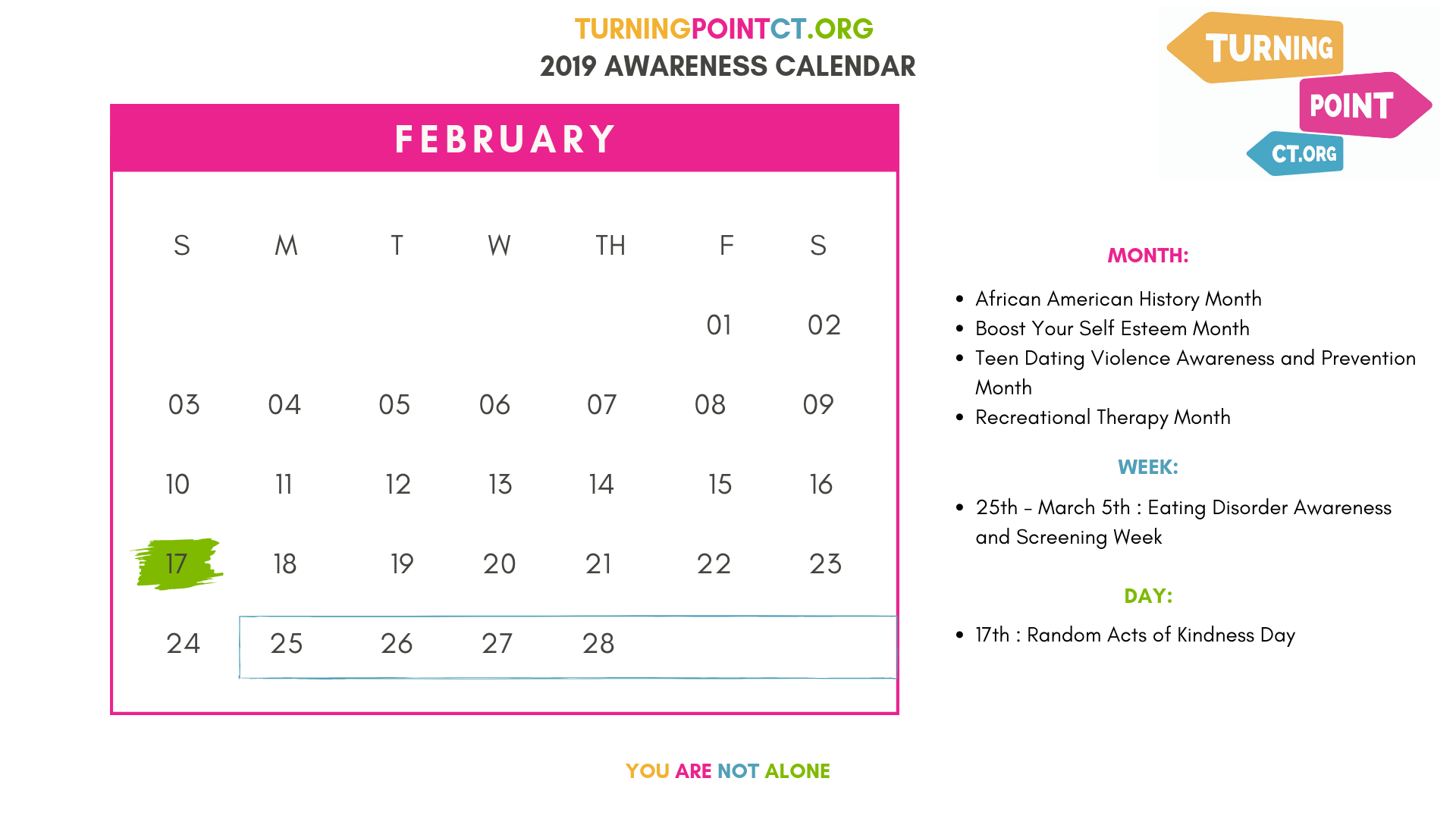 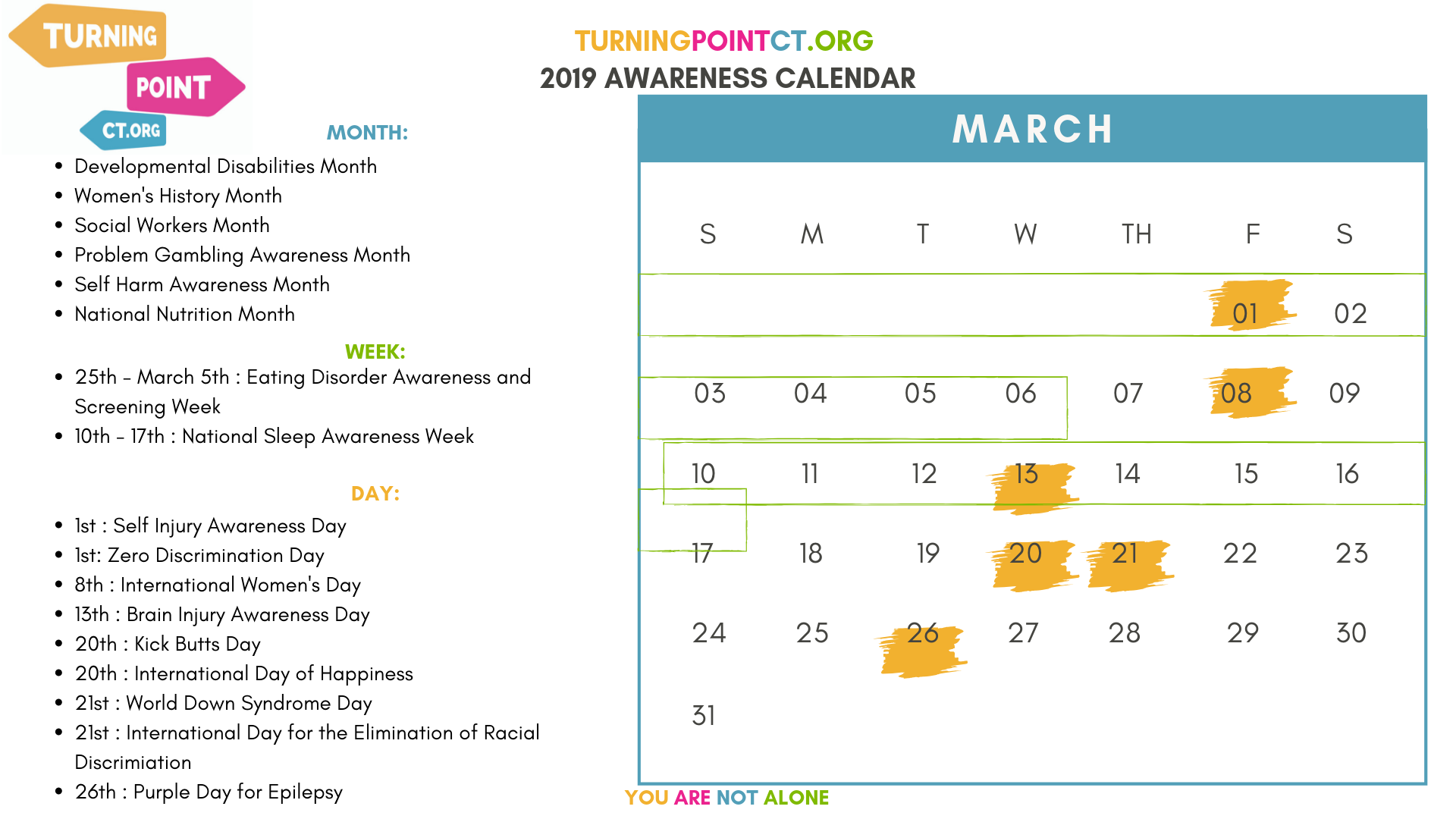 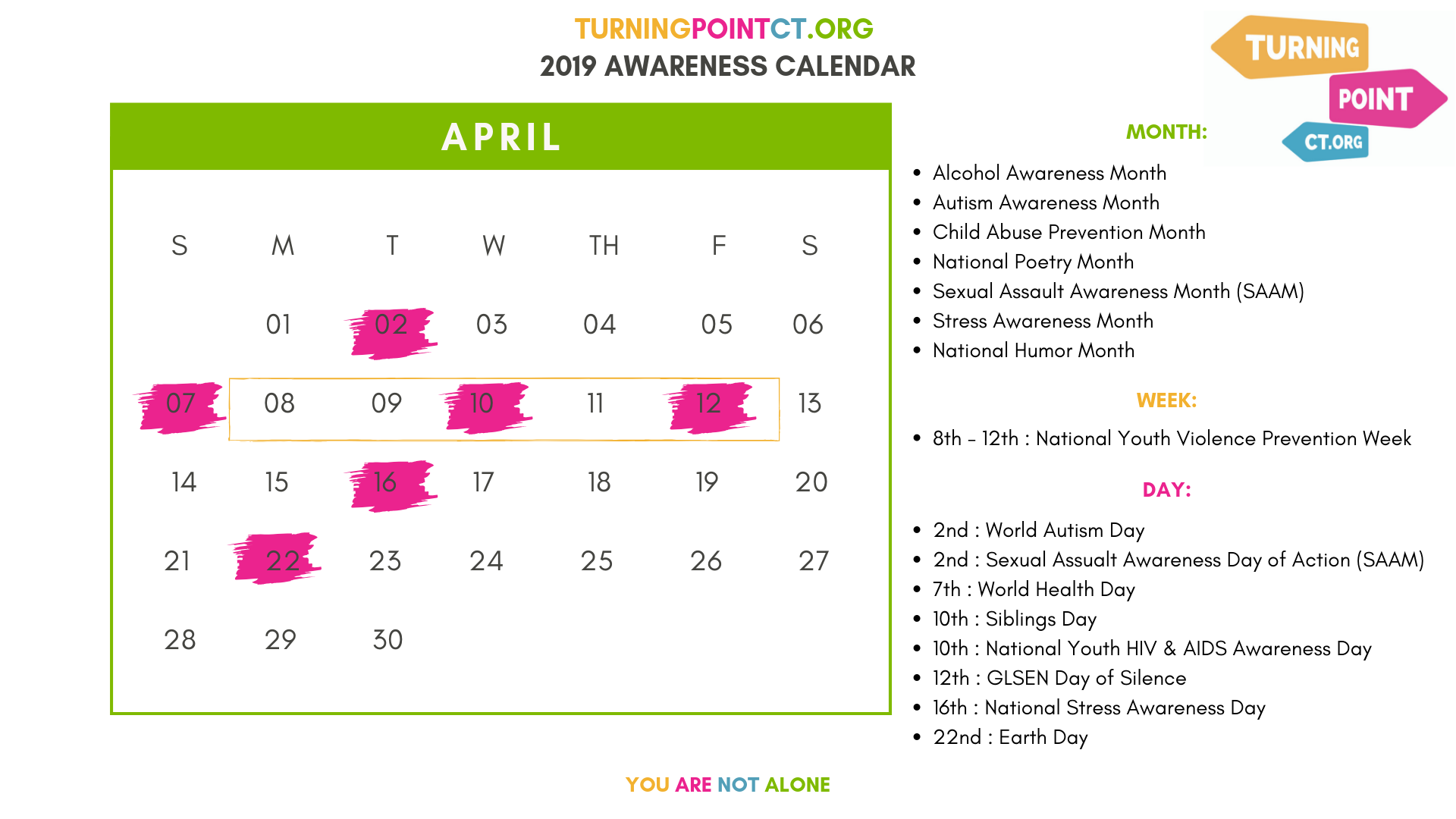 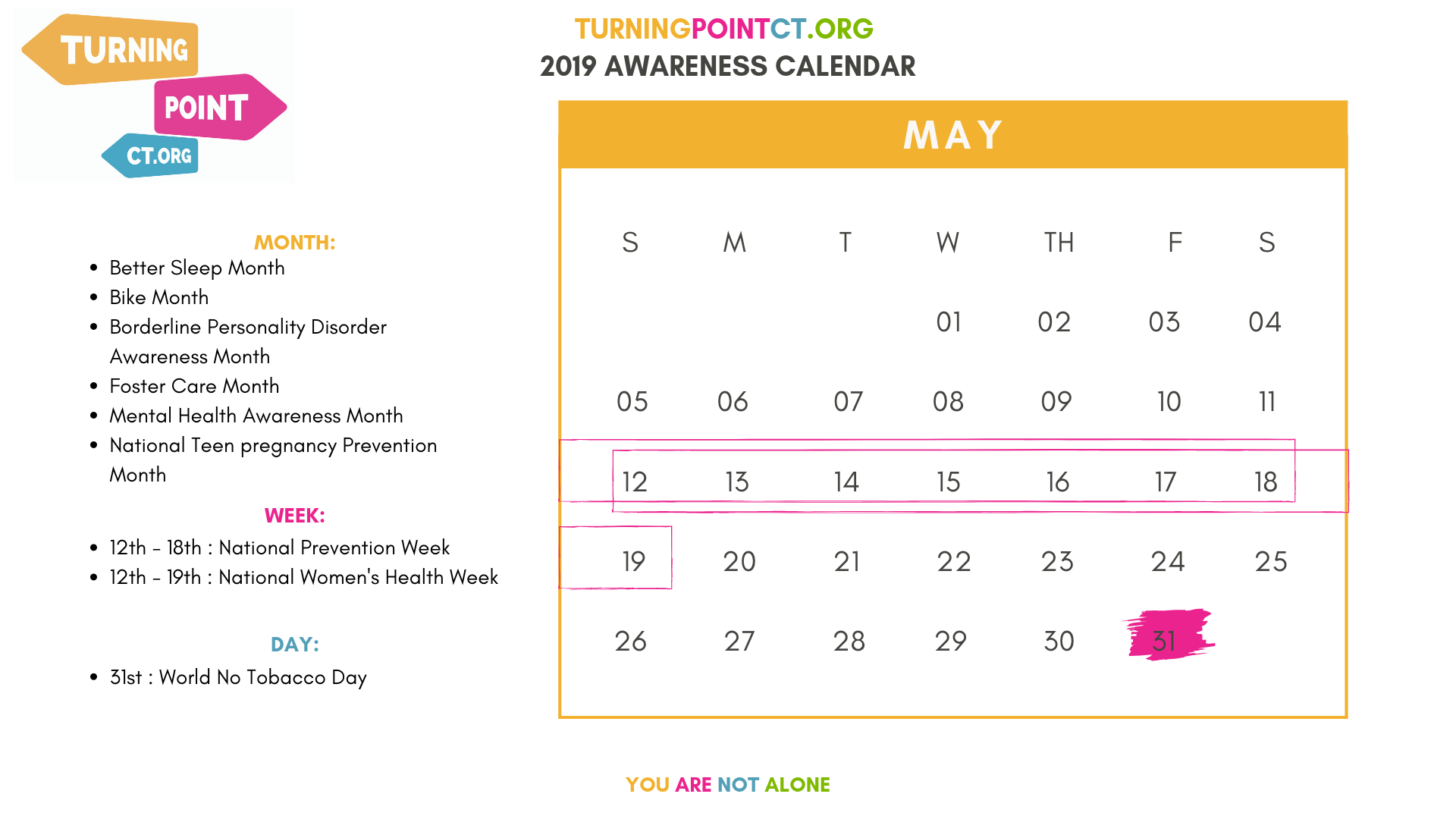 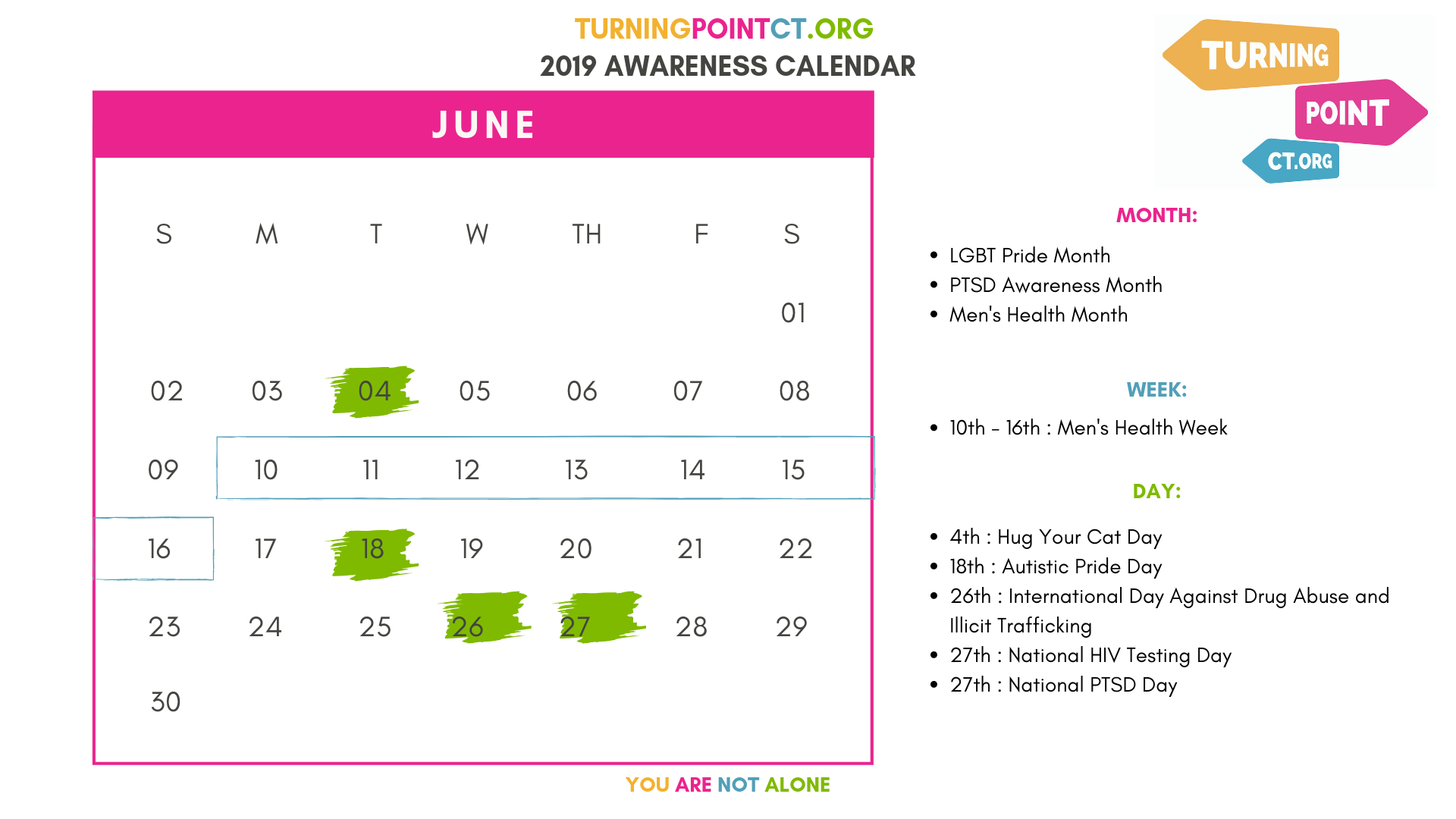 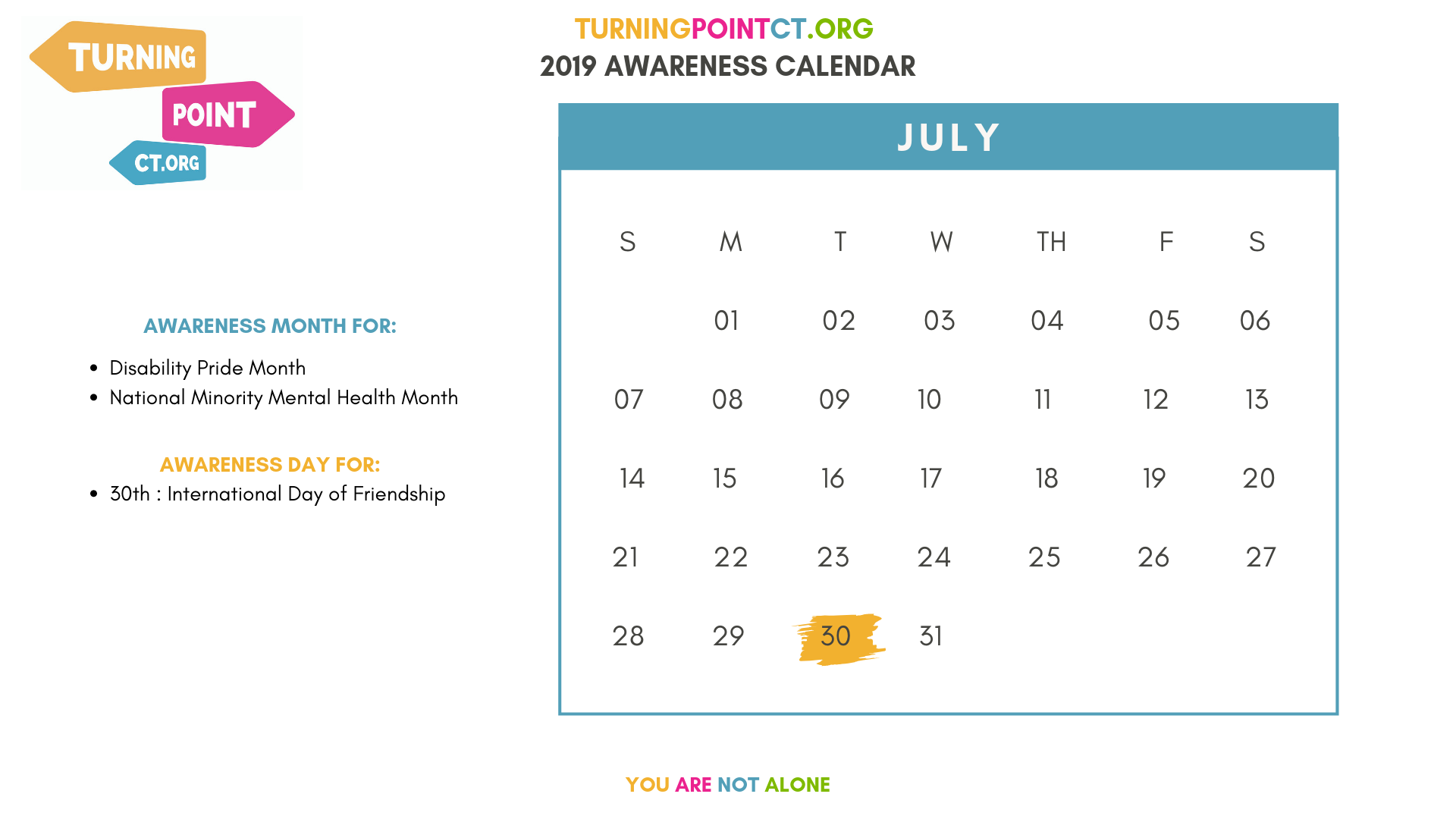 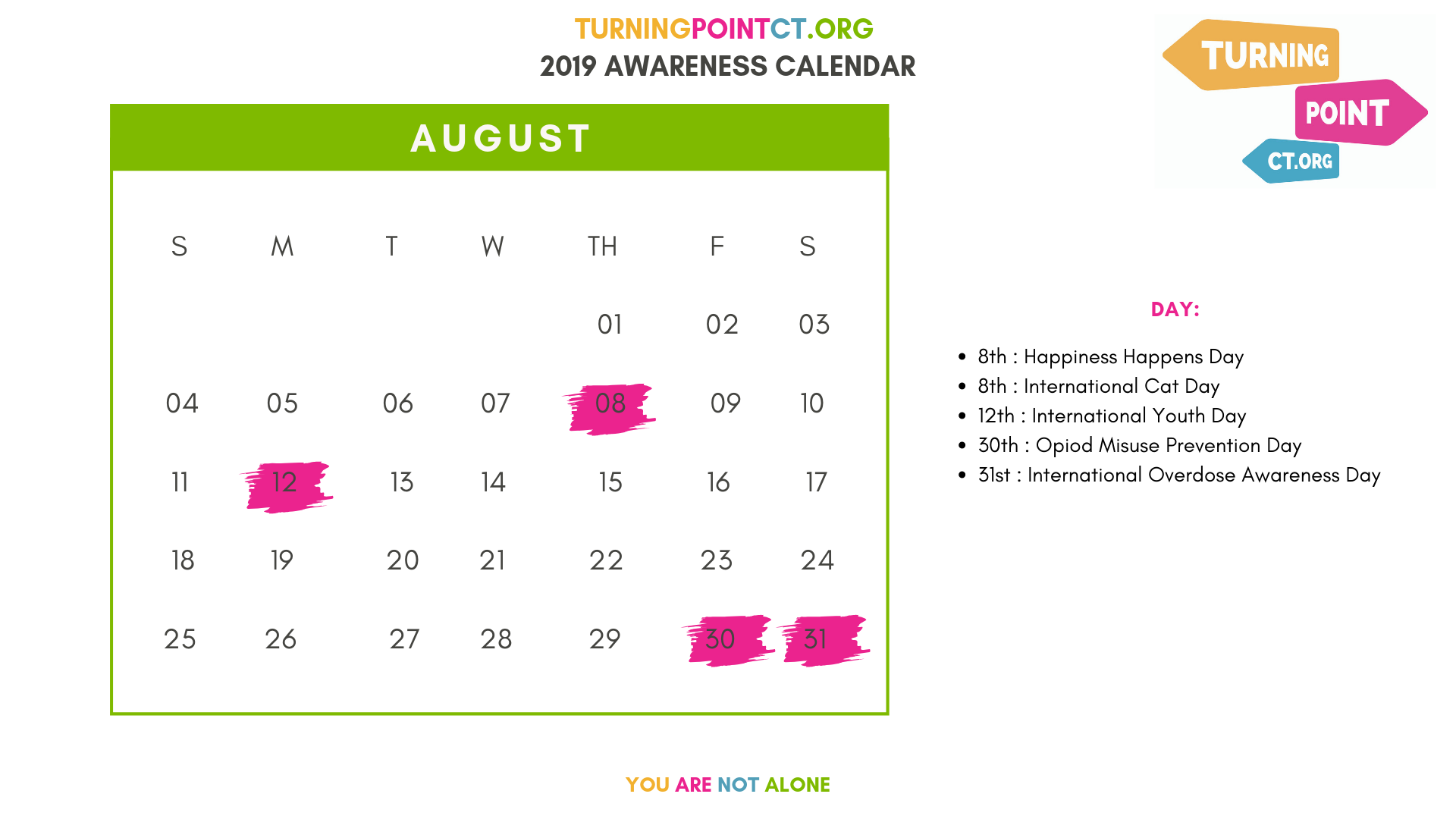 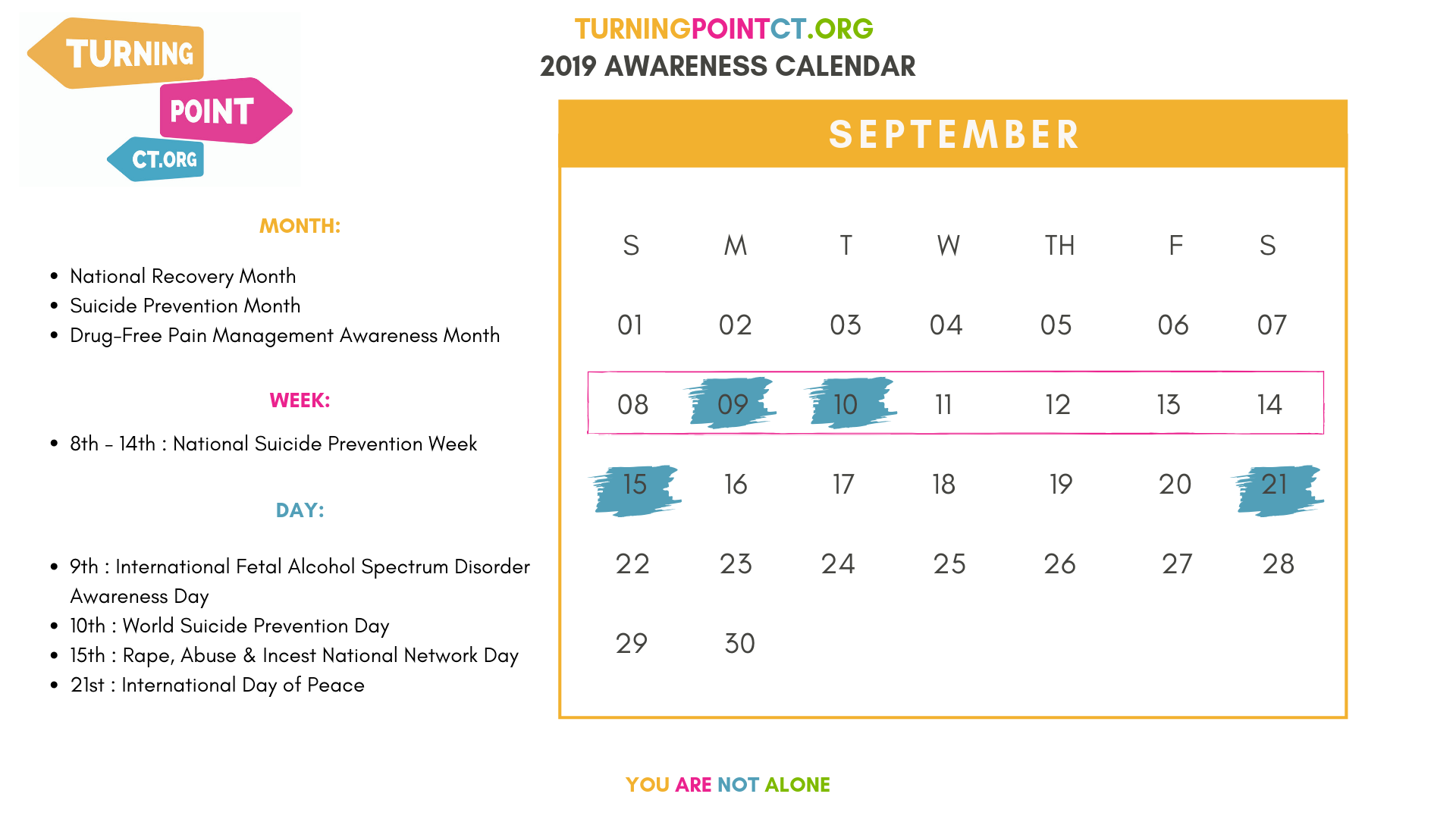 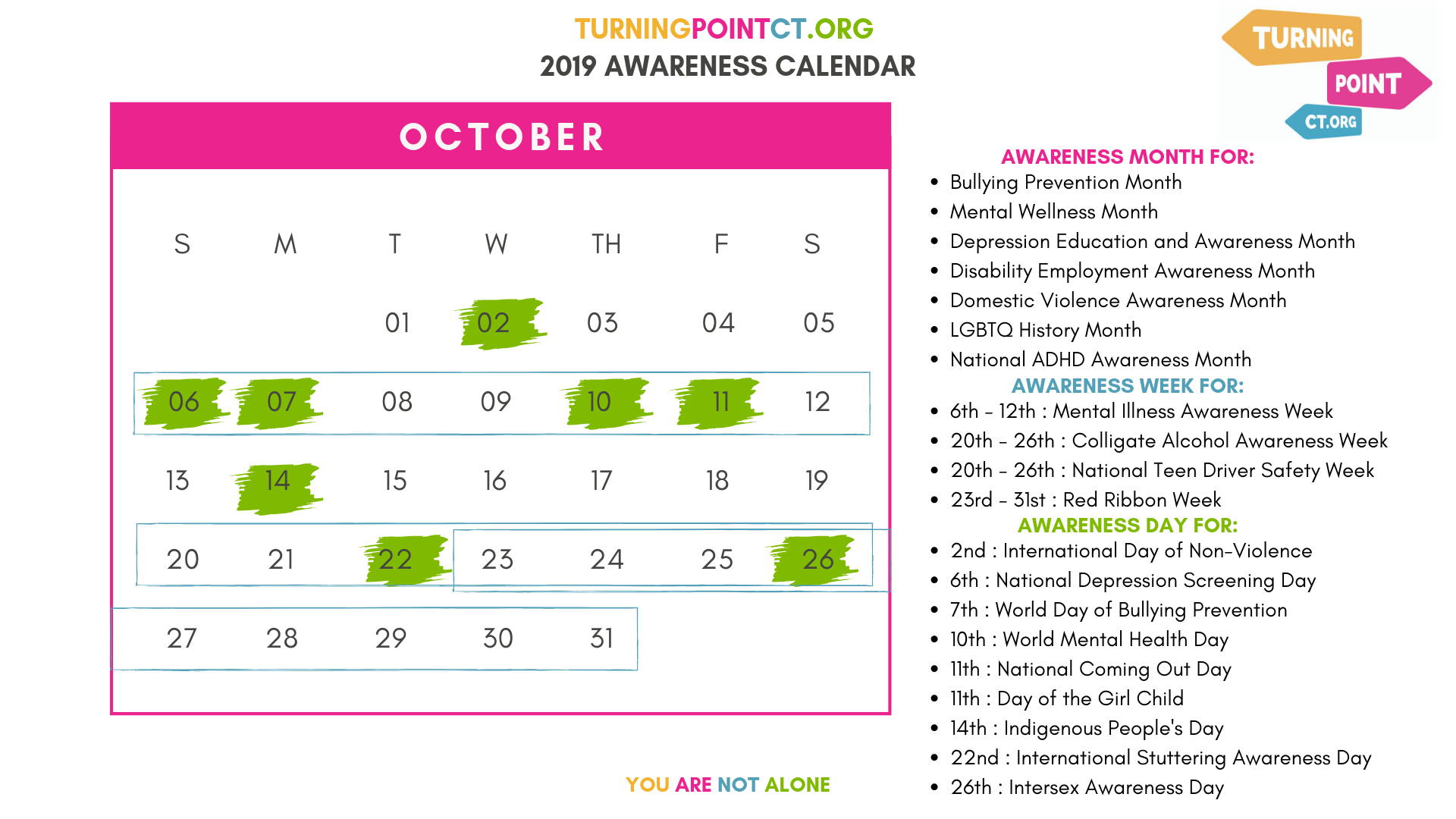 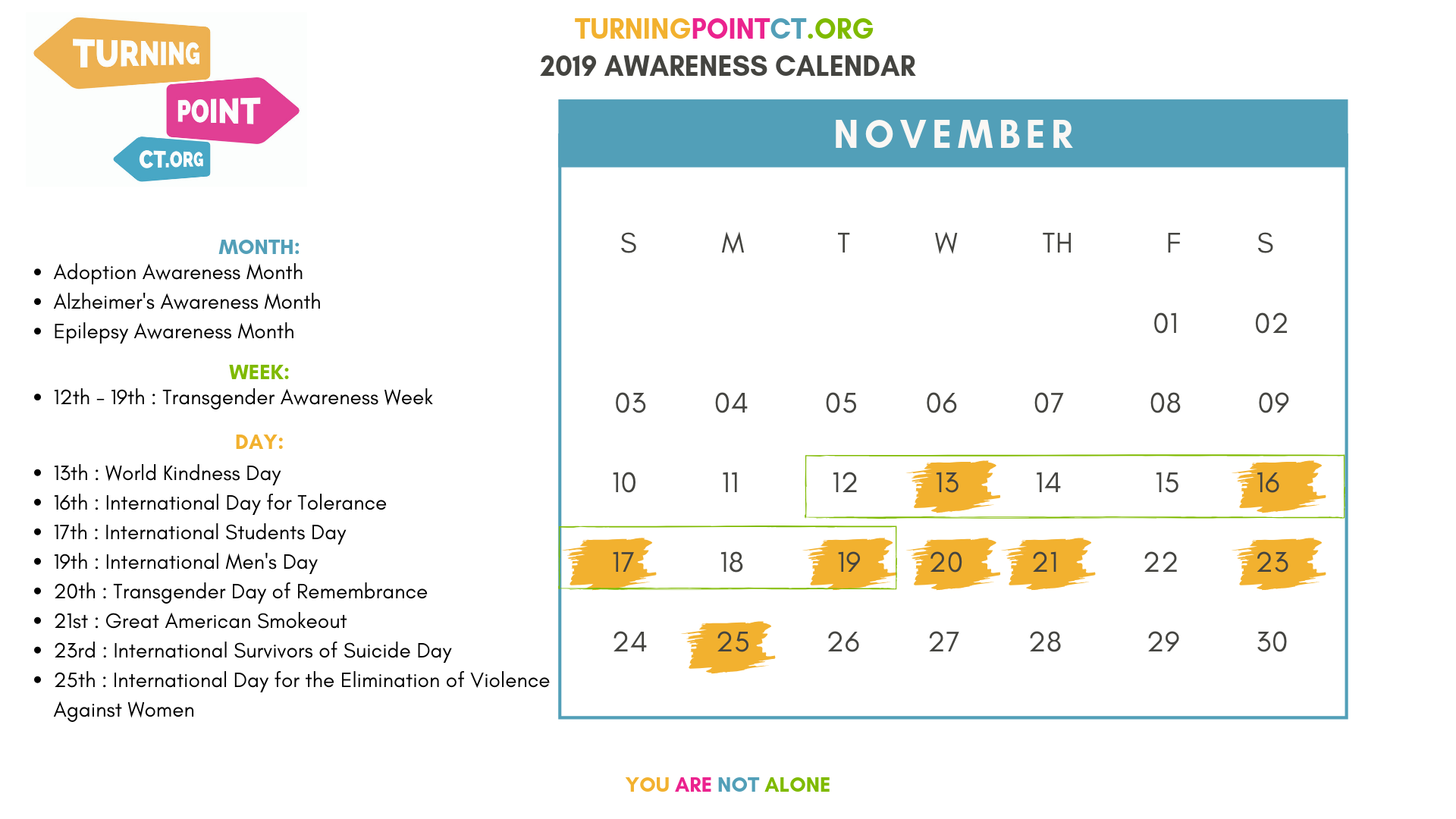 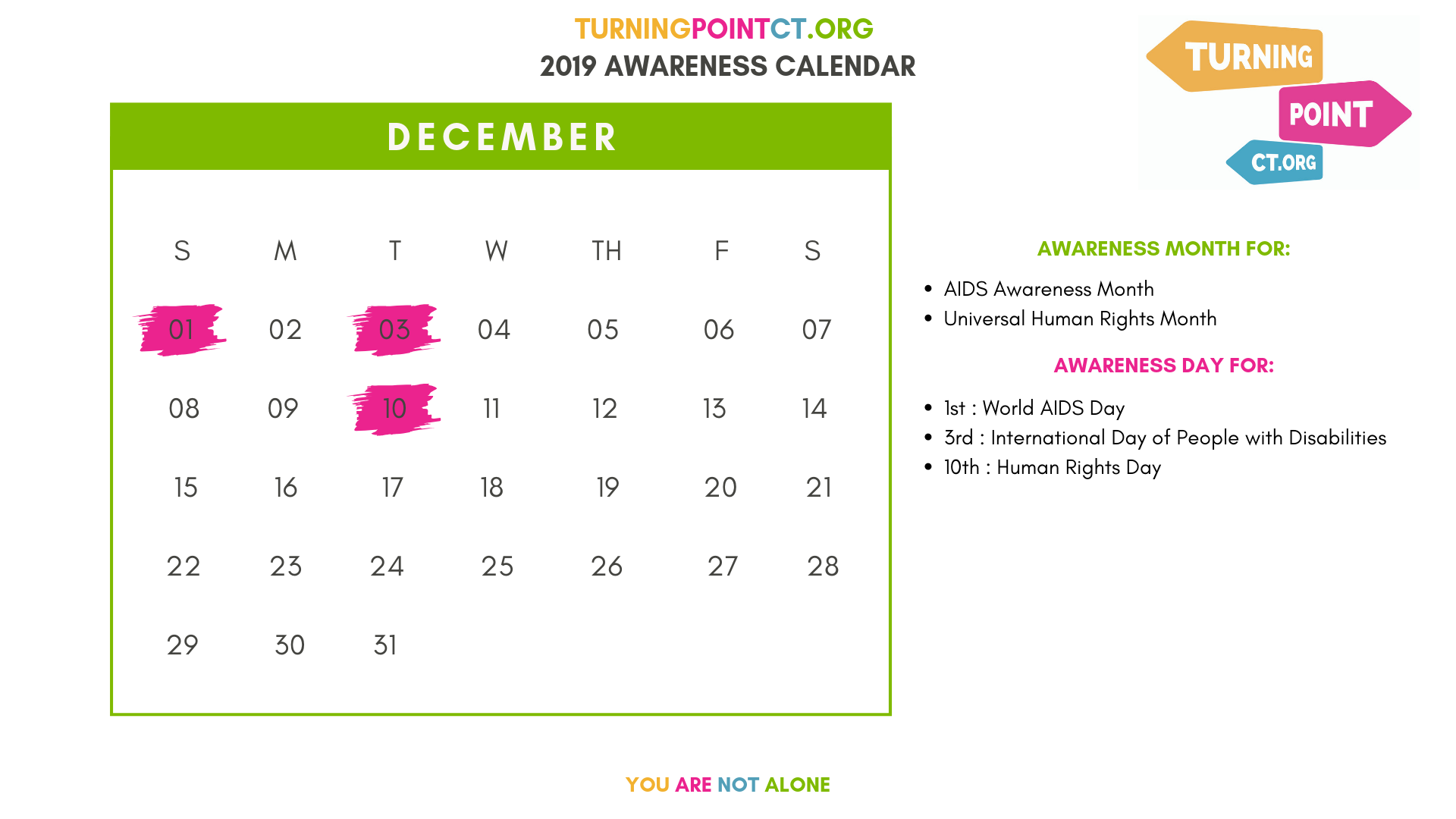 If you want to check out last year’s awareness calendar, click here!

Hi everybody! To celebrate the new year, Turningpointct.org has made a calendar showcasing mental wellness awareness days to share with you!

Below is the entire calendar

Share with your friends, or enjoy it yourself! Some of the days may be familiar and some may be new!
We hope you all enjoy it! 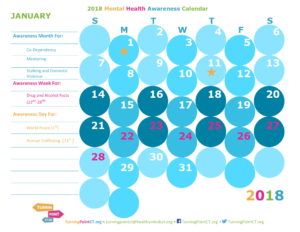 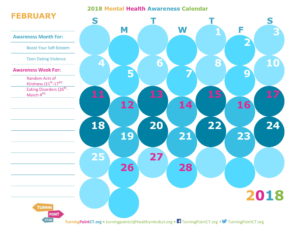 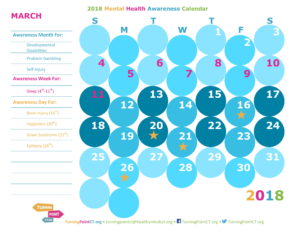 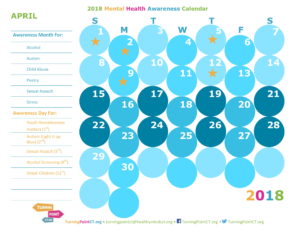 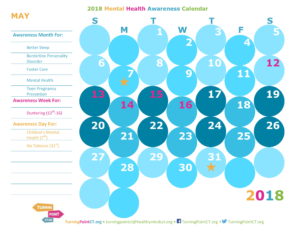 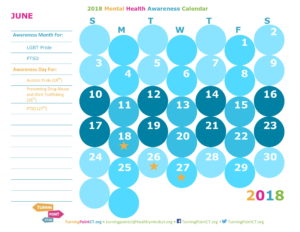 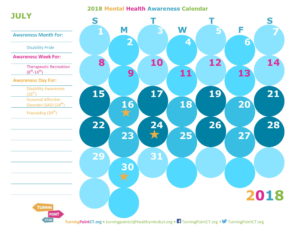 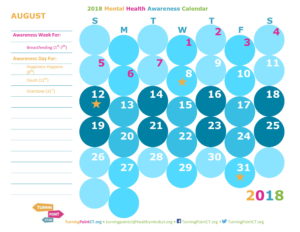 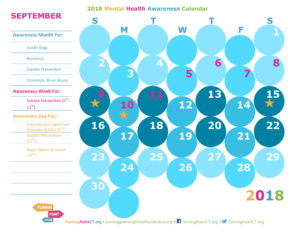 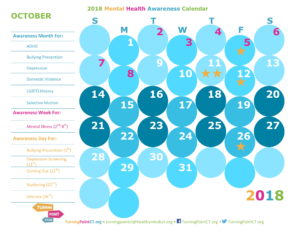 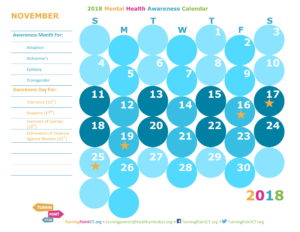 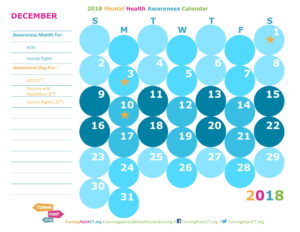 Not everything in life is full of rainbows and dandelions, in fact being a young adult in this day in age can be really difficult! Some days #adulting feels just like this, when you can look both ways before crossing the street and then you end up getting hit by a plane instead ?? Here’s to pushing through those hard days and being a survivor of life!

What kinds of “adulting” things seem to be harder for you?

What kinds of things are easier than you expected?

What if I never get THAT apology?

Have any of you ever experienced feeling hurt by someone and never having the opportunity to:

A: Confront the person about it
B: Get an apology
C: Talk things through to reach a mutual ground about the situation even if no one apologizes

What have been your experiences, and how do you feel about them now?

In my personal experiences, I can definitely say that I have been hurt by people who have caused me a great deal of harm, physically, emotionally, etc., and most of them I NEVER got the opportunity to talk to or get an apology from. On the same note though, as more time passes and I learn more about certain people, certain situations, etc, I come to realize that there are some individuals that don’t even have the slightest idea of the harm they have caused you or anyone else. Others may be living their life freely, in peace, rejoicing in every moment and I could be suffering inside. So instead, I made the choice to push all of those painful experiences I’ve had to go through and use them to help other people realize they don’t have to get stuck. It makes no sense to drink poison yourself and expect another person to die. If I would’ve continued to hate those whose caused me harm, I would’ve been poisoning myself and what good would that have done if it effects no one else but me? For me, it was about making a personal choice to be stronger than all of my experiences and realize that there were certain things that I was never going to get. I may never get certain things back, I may never hear I’m sorry for certain behaviors or explanations for heinous actions. But today, that’s okay because I’m okay.

What about for you?

Deported for Not Being Gay Enough

“Not like the brazen giant of Greek fame,
With conquering limbs astride from land to land;
Here at our sea-washed, sunset gates shall stand
A mighty woman with a torch, whose flame
Is the imprisoned lightning, and her name
Mother of Exiles. From her beacon-hand
Glows world-wide welcome; her mild eyes command
The air-bridged harbor that twin cities frame.
“Keep ancient lands, your storied pomp!” cries she
With silent lips. “Give me your tired, your poor,
Your huddled masses yearning to breathe free,
The wretched refuse of your teeming shore.
Send these, the homeless, tempest-tost to me,
I lift my lamp beside the golden door!” Emma Lazarus (November 2, 1883)

“Franco is being deported from Sweden. Because he’s “not gay enough.”

He fled Nigeria after being brutally attacked by homophobes inside his own house – his boyfriend was killed in the attack.

Now, the Swedish migration authorities want to send him right back into danger because he couldn’t “prove” that he’s gay.” Published: January 26, 2017, in partnership with the Swedish Federation for Lesbian, Gay, Bisexual, Transgender, and Queer rights.

Not gay enough? What does that mean? Not out and about? Not hanging in enough gay bars? Or is it just another plight against individuals because of their sexuality. Isn’t this awkwardly comparable to saying that someone is not ‘straight enough’, which is inherently prejudice?

Worst, to imagine this a legitimate verdict, under any legal system that vows to criminalize prejudice, is contradicting.

At the same time, drawing from recent memory, I can’t recall anyone telling me, or any other gay person whom I know that they will spare us prejudice because of the level of our ‘gayness’.

From observation, there is no real justice in falsely claiming the inexistence of prejudice. On paper it looks good but in reality it’s prejudice all the same. It’s simply sad and unjustifiable.

I’m not exactly sure that one can be ‘black enough’ or ‘immigrant enough’. If I am wrong and that is true, does that mean that one is entitled to a certain level of kindness, compassion and tolerance because of the depth of their skin color or their immigration status? Sadly, this is happening… it’s sadly true and in this case, it hurts.

Anyone who flees their country due to persecution, will confirm that their former life was utter hell… and so is their fruitless effort to prove that they were something that they are not. For this reason, their greatest wish is not to be judged, in any way or form, on the basis of their sexuality. A life spent constantly fighting the odds, is in itself, a burden to bare. So being expected to acclimatize to ever changing perception of sexuality is unfair.

There has to be some balance in this world for gay people (and other minorities) because no human being should have to ‘ask’ for their basic human rights. That is not the reality or the world we want to live in.

“Let the poor the needy and oppressed of the Earth, and those who want Land, resort to the fertile lands of our western country, the second land of Promise, and there dwell in peace, fulfilling the first and great commandment.” President George Washington.