It began when I was 14 and at summer camp. I wasn’t happy with myself back then. Whenever I looked in the mirror I was upset and wanted to change, but I didn’t know how. I was afraid. When I left for camp, I was given an opportunity: 3 square meals a day and no snacking in between. And when I ate, I restricted…a lot. To the point where I would wake up dizzy with hunger. But when I got back home, I was shocked and happy with how much weight I had lost. It motivated me to keep going. But no matter how much I lost, it was never enough.

At first, I had a lot of doctors appointments (to see if my weight loss was related to an undiagnosed disease or disorder). Then my doctor recommended a specialist. I hated him and I hated going to see him because I didn’t want to admit I had a problem. It was a terrible time for me because I was very unhappy but very unwilling to change.

My turning point was my lowest point. My therapist informed me that if things didn’t start to change, he would consider recommending that I go in-patient (for my own good because my physical health was getting poorer). The thought terrified me. I refused and got very upset. Long story short, I had to be restrained and an ambulance was called. Later that day I was miserable and in-patient, but I finally knew that something had to change. I had to change. And so I began to eat. The first meal was the hardest, but while in the hospital, I ate everything and began to really examine the reasons behind my eating disorder. After a week I went into intensive out patient. I met a lot of people going through the same struggles that I was – all at different stages in their lives. Seeing what they went through and talking with them about what I went through really solidified my resolve to get better. Finally, when I left out patient, I started seeing a new therapist. When I met her, I also met her therapy dog Phoebe. The connection I had with Phoebe was instant and I loved seeing her and talking with my therapist each week. My therapist recommended that I begin working and riding at a local horse barn, and my time there really helped my in my recovery. Those last few months prepared me to maintain my new healthy way of life.

Life now is better than ever. I’m in my final year of graduate school for a degree in social work and I’m aiming to become an animal assisted therapist to help other people who went through what I did. I have great friends and family who support me. Sometimes, I get urges to restrict, but I’ve accepted that as part of my life and I now have the tools I need to address those feelings in a positive way. I am happy and healthy! 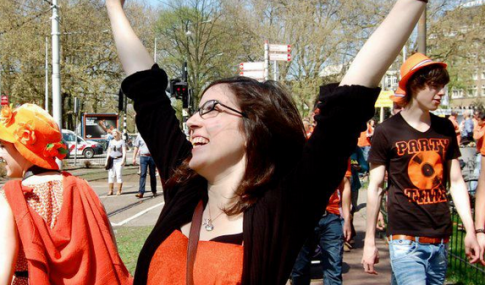 I was shocked and happy with how much weight I had lost... But no matter how much I lost, it was never enough.