When I was 10, I was just standing by the road and thought about crossing the street in front of a car, on purpose.

When I was 18 or 19 things really started falling apart fast. I had issues with self-esteem and feeling safe and a lot of anxiety. I’d go outside and I was dorming at the time, and I almost expected the characters from a TV show to come out of the woodwork from around buildings. I knew they weren’t going to, I wasn’t seeing things, but I was struggling to keep things real. I couldn’t sleep for more than 4 hours for the last three weeks before I went into the hospital when I was 19. I would isolate a lot, I felt lonely.

Getting the diagnosis was sort of a validation of what I have: It’s a something!

When I was 14 I came out to my mother as being a survivor of childhood sexual assault, so we found a counselor. From that point until I was about 20, I would start and stop therapy based on, “well, now my anxieties and my insecurities and my problems relating to PTSD are flaring up,” or “I’m in a new place, so I’ll seek therapy and I’ll tell them my six-word memoir.” Then I wouldn’t know what else to do.

When I was 19 there was an interview process [with a therapist] that had never happened before. It was sort of a revelation to put all of these pieces together finally. She was asking me concrete questions about suicide ideation, history of self-harm, delusions. I had never been asked before. It helped me find out what I was dealing with so I could know what I wanted to do about it.

I saw her a few times and then I erupted at my dad over something that he thought was really not a big deal, and I laid it out for him: I am not just being sensitive, I am not just being like my mom, whatever the hell that means anyway because at that point they were divorced! I told him that I had my first experience with suicide ideation when I was 10 years old and I’ve never done anything about it in terms of resolving or figuring it out or anything, and I laid it out for him and he sat there quietly and said “OK. Well, I’m going to make some phone calls and we’re going to figure out what to do because whatever you’re doing isn’t working.” So he gave me information for a psychologist and she had me crying inside of twenty minutes, balling my eyes out, and she suggested inpatient or intensive outpatient, and I said that would be okay….

I got effective treatment in the hospital. I was in there and everyone I spoke with, the other patients, said that they wanted to get out … [but] I’d been dealing with symptoms for 10 years and hadn’t gotten anything to work. So I went in there and I said “I’m not leaving until you do your damn job.”

I’m working full-time, which I’ve never done before. I’ve graduated from community college, which I’ve been chipping away at for a long time. I’ve completed different trainings, some for me to get stronger and some for me to help other people in the same boat. I feel safe where I’m living, though I’m not living on my own yet—that’s a goal of mine. I go on adventures into the city, and I have a circle of very close friends. I have a good relationship with both of my parents, which for a while was an issue. I feel stronger.

I still have days where things don’t go the way I want them to, but I handle it a lot better and I do what I need so that I don’t fall apart like I used to. Right now I’m titrating off my psych meds with the support of my psychiatrist, to see if I can be okay without them—‘cause I’ve got a lot more coping skills and a better support network than when I started seven years ago.

I would definitely want to say: you are allowed to have bad days, and you deserve to have good days.

To family members, I would say: trust that [the person who’s struggling] is trying their hardest. And read a lot! Do research. Don’t be afraid of doing research and coming back and saying, “what do you think? Does this reflect your experience?”

Keep in mind [that your family] may very well have the best of intentions but they are not the authority. They’re trying the best way they know how. 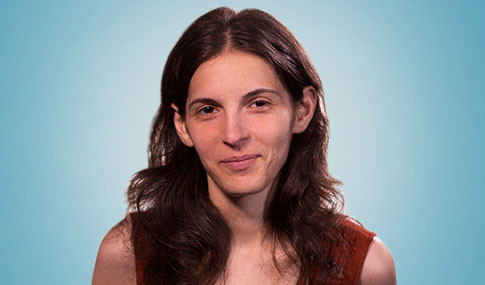 I would start and stop therapy based on, “well, now my anxieties and my insecurities and my problems relating to PTSD are flaring up.