Dominique’s Story About Learning To Reach Out For Help, Age 24

I struggled with a lot at an early age. I felt like I had the weight of the world resting on my shoulders and I didn’t know how much longer I could carry it. Things were really hard after my parents split up. I barely heard from my dad for a while and my mom made me feel like it was my sibling’s and I’s fault that he left. Sometimes, I felt like maybe it was. My mom was barely around leaving me with my two younger siblings alone. I had to make sure they were okay and I often forgot to take care of myself. I barely ate or slept. I was in middle school. Can you imagine being in middle school and having to take on all of that responsibility on your own? It was a lot. And it took a huge toll on my mental health. I was constantly depressed. I blamed myself for my parent’s divorce and my mom not being around. Eventually, it got to the point where I was self-harming. I was miserable, I felt like I wanted to die. I didn’t want to feel this way anymore. I needed help but I didn’t know how or who to ask for it. I was drowning.

At first, I was seeing the school counselor for a while. My mom found out I was self-harming and called the school about it and that’s what they decided to do. The counseling helped but I wasn’t getting any real support at home. Between work and dealing with her own feelings, my mom didn’t really have time to listen to me and my siblings were too young to understand what was going on. I knew my friends cared about me but I didn’t want them to worry so I never said anything. My close friends knew something was wrong even without me telling them so I knew I had their support regardless. Other than that, I didn’t really have anyone except the counselor.

It wasn’t until I had gotten to high school that things started to get a little better. I was seeing my guidance counselor, Mr. Auriantal, twice a week. I was also finally starting to address how I really felt about my dad leaving. I was hurt. I felt abandoned. But I had people, my own relatives, telling me that I wasn’t allowed to feel that way. They were wrong. I get that breakups are hard but I lost someone who PROMISED that they were never going to leave me and then they did. I was heartbroken. I wasn’t able to express that fully to anyone at the time, so I used to write poetry about it instead. I felt free finally being able to express myself.

Life’s a little better now. I still struggle from time to time but who doesn’t? I have a great therapist and she’s been a huge help through it all. I’ve been seeing her for a pretty long time now and she’s helped and is continuing to help me work on so much. From past trauma to trust issues, relationship issues, and everything in between. Without her, I’m not sure what I’d do. She always makes me hold myself accountable for my actions and my feelings. She constantly reminds me that I have to take control. I can’t let my mental health dictate my life. I’m working on being a better, healthier version of myself. I know I’ll get there in time. I have a great job working with special needs students and they truly remind me how lucky I am to live this life. They make me feel like I’ve made a difference. I have a couple of wonderful friends, not many but quality over quantity, and the ones who stayed are irreplaceable, priceless even.

Don’t ever feel like you have to go through anything alone. I wish I had known that it was okay to reach out for help. Growing up I felt like I had to do everything on my own because I never felt like I could rely on anyone. Getting older I’ve learned that you don’t have to do it all on your own. It’s okay to ask for help. The right people will be there when you need them and the people who aren’t, they’re not worth your time. I wish I had someone to lean on going through everything I did, I should have reached out but I didn’t. I never want anyone to feel the way I did. You shouldn’t have to go through things alone. 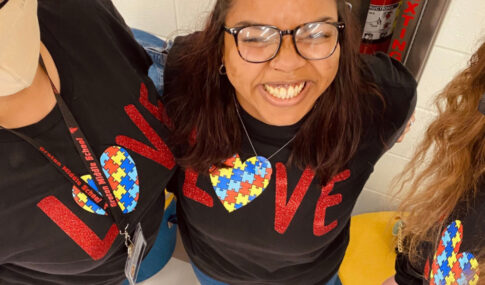 I struggled with a lot at an early age. I felt like I had the weight of the world resting on my shoulders and I didn't know how much longer I could carry it.