I’d like to preface this by saying that my story’s far from the worst example of OCD. I’ve heard stories of far worse anxiety than mine, and far worse compulsions and effects on their lives.

When I was 16, I began struggling with religious OCD. In other words, this meant that my obsessive fears were over religious topics–namely, going to Hell. And, as is indicative of OCD, I began performing compulsions to alleviate these fears. These compulsions took the form of specific prayers for repentance for “sins” I believe I had committed.

The list of these sins was broad. At the time, I was following a strict interpretation of the Christian Bible, taking to heart quotes such as Luke 14:26– “If any man come to Me and hate not his father and mother, and wife and children, and brethren and sisters, yea, and his own life also, he cannot be My disciple.” For me, this meant that any thoughts I had that were about myself were automatically sinful, meaning that I would be spending a lot of time believing myself to be headed for Hell. And even if I had repented compulsively for hours on end, there was still that sense of uncertainty that drives OCD: “what if it’s not enough?”

Of course, there was a honeymoon period in my religious experience, before my OCD started taking off. I remember tracking the date as December 18th, 2017. I had something of a conversion experience– I resolved to put my religious faith first over everything else. I’d had an internal fear of Hell for as long as I’d remembered; now, I would do something about it. I would become the kind of religious the Bible had talked about. I would do everything I could not to go to Hell.

My anxiety actually dropped as a result of this. For the first time in my life, I had no fear of Hell, and while I was praying more, I was still able to go about my life as I initially had. But then I started noticing a feeling in the back of my brain compelling me to behave certain ways– more religious ways. I called this feeling the Urge, and it was starting to ask the question, “are you really saved?” “I don’t know,” was the answer. And so, the compulsions started slowly.

There were very specific things I had to do not to go to Hell. For example, if I were walking down the street and I didn’t compulsively pick up every bit of trash I saw, I was going to Hell. If I didn’t evangelize to a certain group of kids I had deemed to be sinful, I was going to Hell. If I read, watched Netflix, or did anything that wasn’t inherently religious in nature, I was going to Hell. And the only way out of this was to pay a tax, one that I spent hours trying to pay, ending up crying many nights, as I would be down on the floor with my face covered, Bible next to me, telling God that I was sorry and to please save me.

Eventually, it reached a bit of a breaking point, which I’ll talk about in a later category.

After a year of this happening, I reached out to my mom. I told her that I thought I had OCD. I wasn’t sure myself, but I knew that something was wrong, and it seemed to be the closest thing that fit. My mom initially thought that I didn’t have the symptoms, but after we talked for a while, she decided to sign me up for therapy. We made sure to find a therapist who was religious, and I had my first meeting with him in March 2019, a month after having talked to my mom. He turned out to be amazing, and we got really close. I was diagnosed with OCD in the coming months.

I do have one turning point, but it falls into the “you have to move backwards to move forwards” category.

Things got a lot worse in the Summer of 2019. In the last few weeks of school, I’d been watching a series of online sermons about how to know for certain if you were saved. They gave lists of ways to tell based on Bible verses, and after examining these signs, I started to realize that I didn’t meet these criteria.

This was when things started to change. For the first time, I had certainty, though it was the opposite certainty that I was looking to hear. The people in the sermons said that if you realize you weren’t saved, then you had to get on your knees and pray until God decided to save you. So, I became convinced that I had to keep repenting, that my OCD was right, and that anything my parents told me or my therapist told me was Satan trying to get me to stop. And so it began.

The problem was compounded by my lack of distraction. During school, I had something to do other than compulsions. But during Summer, I would spend almost entire days on the floor, begging God to save me and watching more sermons. I was hoping they would say something different, and occasionally they did. Sometimes, I would be able to trick myself into thinking that I met their signs. But in the end, I always came back to OCD’s compulsions.

My therapist told me that there will always be a part of me that reacts differently to certain things, but in those months following my turning point moment, we worked together to keep OCD from rising back up. It’s still with me, its hold over me gone, only flaring up occasionally until I can bring it back down.

I’m coming up on the one year anniversary of my last compulsion. It was a bit of a struggle to find new meaning after my religious beliefs changed, but I think I’m starting to get the hang of it. I’ve started writing, which has proved to be a major passion. I’ve been fixing the relationships that have been hurt by my OCD. I’ve started writing a novel, and I’m a fifth of the way through.

Life’s looking brighter now, all in all.

Spirituality isn’t bad, by any means. I’ve never stopped respecting religion, particularly those devout people with the courage to give their lives to it. And making sacrifices for a higher purpose is incredibly honorable. But you have to be doing it because it’s what you want, not because you’re forced to by an underlying condition. Seek out help; people care. And when you begin to recover from these issues, you’ll find that you’re free to follow your faith how you desire, and it will be clearer as a result. Only through recovery can you have the spiritual experience you want to have. 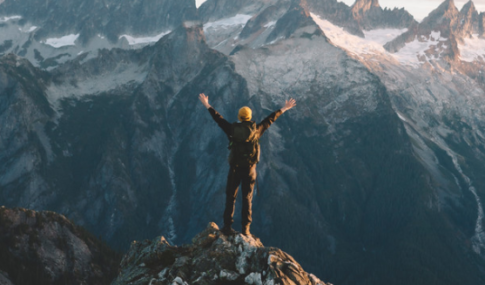 My therapist told me that there will always be a part of me that reacts differently to certain things, but in those months following my turning point moment, we worked together to keep OCD from rising back up. It's still with me, its hold over me gone, only flaring up occasionally until I can bring it back down.