PTSD after sexual assault and 27 surgeries. I grew up thinking an “illness” was either fever or croup. Illness was a stuffy nose — a sick-day, an excuse to miss a day of school. At 18 years old, “illness” took on an entirely different meaning. Illness meant waking up from a coma, learning that my stomach exploded, I had no digestive system and I was to be stabilized with IV nutrition until surgeons could figure out how to put me back together again. Illness meant a life forever out of my control and a body I didn’t recognize. My body never went back to normal. With no other alternative, I learned how to accommodate it and embrace it for the amazing things its extraordinary resilience.

I was shocked and saddened that I could never get my old, unwounded body back. But what really startled me was realizing what had happened to my mind.

PTSD. I had never heard those letters put together before. I knew what “trauma” was, but I didn’t know it could cause so much internal dis-ease and dis-order — illness that I couldn’t see.

But that was the biggest shock to me — waking up in a new body and a new mind, troubled by Post Traumatic Stress Disorder.

The PTSD term for finding healthy coping skills is “self-soothing.” To live a healthy thriving life, I’ve had to befriend my past, embrace my experience, and express what had happened to me. I needed to tell my story in order to heal. But first, I had to hear my story for myself, rather than avoid it.. Once I learned how to hear my own heart-shattering story, and feel the pain, the frustration, the anger, and ultimately, the gratitude, I was able to speak to it. I was able to gently teach myself how to live in the present moment rather than in the world of the trauma.

Healing didn’t come all at once. Every day I tried to face a memory a bit more. I called it “dipping my toes” in my trauma. Finally, I could put words to my grief. I was able to write, “I am hurting.”

As soon as I was able to write words like “sadness” and “pain”, I allowed myself to explore them. Soon, I couldn’t stop the words that flowed out of me. My memories started to empower me, and I wrote with feverish purpose.

I started to journal compulsively for hours as every memory appeared in my mind. Soon, the words couldn’t do justice to my traumatic experience – I needed a bigger container. I turned to art, drawing, scribbling. I filled pages with teardrops, lightening bolts and broken hearts. For me, creativity became a lifeline – a release. It was a way to express things that were too overwhelming for words. Expression was my way of self-soothing.

Once expression helped me face my own story, I was able to share it. And the day I first shared my story with someone else, I realized I wasn’t alone. There were others that had been through trauma and life-shattering events. And there were also people who had been through the twists and turns of every day life. Being able to share my story emboldened me with a newfound strength and the knowledge that terrible things happen, and if other people can bounce back, then so can I.

My perspective on illness has changed since my days of “croup”, and it’s also changed since my last surgical intervention. I’ve learned that illness isn’t always in the physical scars. I’ve learned that some wounds aren’t visible, and some wounds even we don’t know we have, until we choose to take care of them. But I’ve also learned that I’m resilient, strong, broken and put together again, differently, yet even more beautiful – like a mosaic. I wrote a one woman musical about my life, Gutless & Grateful, that Ive been touring across the country as a mental health and sexual assault awareness program for colleges. As a survivor and “thriver” of nearly 30 surgeries, a coma, and a decade of medical trauma, I have been challenged with moments of extreme difficulty. But as an artist, newlywed, actress, 28-year old college student and overall lover of life, I’ve learned so much from this beautiful detour.

You don’t know what you’re capable of until you’re tested, so just trust that you are capable of anything and you’ll get through. It can get better. 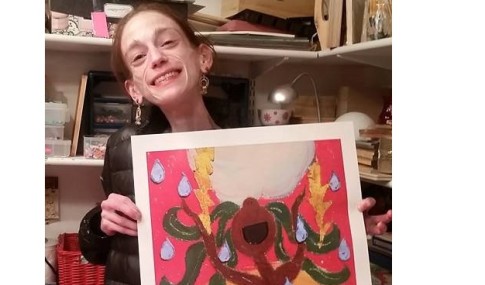 As a survivor and "thriver" of nearly 30 surgeries, a coma, and a decade of medical trauma, I have been challenged with moments of extreme difficulty. But as an artist, newlywed, actress, 28-year old college student and overall lover of life, I've learned so much from this beautiful detour.