Hi everyone! We have a new April Feature up!

On Saturday April 6th Eliza, Ally, and 10 teens from Norwalk and Fairfield completed an escape room at The Panic Room in Norwalk! It was really fun, and we finished with a few minutes to spare!! Stay tuned to see what next months free wellness activity for SMART Teen Norwalk will be!!

Until then, check out our feature here! 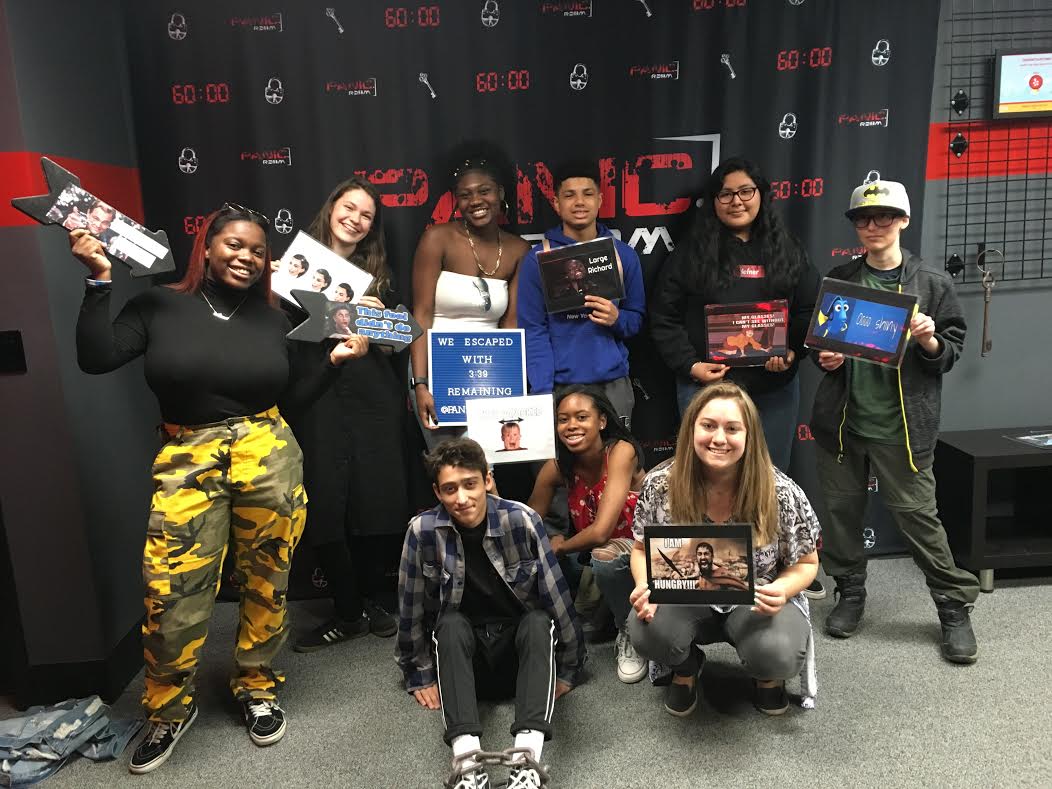 Have you ever had something appear in places that brings you comfort? Maybe a ‘sign’ of some sort to let you know that God, your Higher Power, or maybe your loved one who passed away is near?

I’ve been having an anchor follow me around and appear starting a little over a year ago. I know, without a shadow of doubt, that it’s God or the Holy Spirit telling me, “I’m here”.

I was never one to believe in ‘signs’ or anything like that. But I definitely believe that God has a way of showing me (and others) that He is near, He loves me (and you), and to keep my (and your) eye focused on Him. Maybe not so much a ‘sign’, but Him using a person or thing to grab my attention to make sure I heard or saw very clearly that He is near.

This anchor and I met without itself as an object. The first time I met this anchor, it was through hearing all about it. I listened to a guest preacher at my church (which happened to be a revival week- talk about being revived!) preach a message on how no matter the storm you’re in; the peace of God can hold you steady. Although you may move a bit and sway around, tossing and turning out on the raging sea, He’s got you, and He doesn’t just have a light touch on you, He’s holding you in place, strong, just as an anchor does.

I’ve heard sermon after sermon about anchors and all the different ways you can use an anchor to make a message. Each message about an anchor I always found so beautiful because they all boiled down to the same point; God is faithful.

This one specific message caught my heart in a different way. I was in a place in my life that I was unsure if I was in the right place, doing the right thing, going the right way. And it wasn’t even about my ‘right’, but I wanted to be in God’s ‘right’, His path.

So, because of that service, I found a peace in an anchor. I became in love with how an anchor represents Him.

I started looking up every bible verse about anchors. I started studying why the word was used and what its’ context was. Then I came across this verse:

“Which hope we have as an anchor of the soul, both sure and steadfast…” Hebrews 6:19

That verse spoke to me and I remember praying, “Lord, please help me to remember that You are my anchor, no matter what storm I’m in.”

Then I met the anchor in person, as a tangible thing. I was at a store and saw rearview mirror decorations. I saw that there was an anchor that you could have dangling from your mirror. I immediately bought it and put it on mirror and thought, “when I can’t drive (spiritually, emotionally, literally) or I have no idea where I’m going, I’m will look at this anchor and let it be a reminder who really has control of the wheel.

I had no idea that this metal anchor hanging from my rearview mirror was going to have so much influence on me. I notice that I tend to have my ‘alone time’ and ‘I need to break down and cry time’ in my car. It’s a place where I am alone, can migrate to a different spot, can put myself in a helpful surrounding, and can cry or scream as loud as I need to. But now I had something with me in the car; this anchor. I don’t find it coincidental that on the moments I was tempted to pull into the Projects and relapse or consider self-harm or not show-up to where I was going (discouragement seemed to be the common theme here), I glanced at this anchor and not only was I reminded, but I felt the peace of God. It reminded me to pray, to stay strong, to push through, or sometimes to just hold on tight and remember that the true anchor is doing everything to keep me from drifting away.

After those moments, anchors started appearing everywhere. But I noticed that they would appear in three different (or all of them combined) scenarios:
1. When I’m extremely discouraged
2. When I’m being faithful to something God put on my heart
3. And when I’m on the fence of trying to figure out if I’m doing the right thing or on the right path

I literally saw anchors appear places and many of the times, they were only visible in my exact spot that I was standing or sitting.
Let me just tell you about a time that an anchor appeared and then you tell me what you think.

I was invited to speak to a youth group. They wanted to hear my story of recovery because many of the teens had been struggling or knew someone that was. This was a BIG youth group; 115 teens to be exact. Earlier that day, I received news that an old friend had passed away from an overdose, a mother was calling me frantic that her son was missing after leaving treatment, my ‘best friend’ was missing and I was being told she was prostituting for heroin, the guy I was in a relationship with told me that ‘he just needs a break from me’, and I had many other personal concerns going on. Basically, everything that could go wrong that day was going wrong, but EXTRA wrong.

Do you actually think that I had the energy or desire to go and speak to teens about how fabulous life in recovery was? Definitely not. I didn’t want to be a fraud. I didn’t want to get up in front of them and be all YAAASSS RECOVERY! Meanwhile, deep inside, I am not feeling fabulous at all.
But I guess that’s where the “faith-it till you make-it” part comes in.

I will never forget how much I complained on my way to speak to this youth group. I was filled with anger, frustration, and pain. Before walking into the room, I prayed as I usually do before speaking. I asked God to clear out all of the clamor in my mind and help me speak to these kids. I remember I even told God that I didn’t want to speak to these kids because I was feeling drained and hopeless.

I stood up in front of these teens and shared my testimony. It was difficult at first because of a combination of nerves and everything going on that day. However, as I kept speaking, my nervousness went away and that peace I long for from God came.

Just as I finished saying my final words to the teens, they started clapping. I thanked them for welcoming me as their guest and I glanced at the youth group leader to turn the conversation over to her control. Just as I was extending my hand to pass her the microphone I was using, my heart stopped at what caught my eye. This microphone was in my hand for the past 40 minutes and I didn’t see it; God didn’t want me to see it quite yet. Maybe it was a test of faith, I’m not so sure…

I chuckle when I see an anchor. Sometimes I cry. But I always feel a peace and know that He’s right here, never left, never going to leave.

I continue to find anchors where I go and they continue to make me laugh and smile when I see the interesting ways God allows me to see them. I’ll never forget when I went to speak to students at a High School and as I was waiting at the security desk to finish making me a name badge, a student approaches me and says, “hey Miss, do you like my new belt?” The belt had anchors lined up all over it. Coincidence? I think not. Or the time I went to speak at another high school and as I was walking through the hallway, a kid had cut in front of me and she had an anchor-print backpack on.

My mom sings at my church and I’ll never forget a song she’s sang many times called, “The Anchor Holds” I am so glad that my Anchor always holds.

Do you have something that you see or maybe hear? Is there a comforting item or noise that you experience? 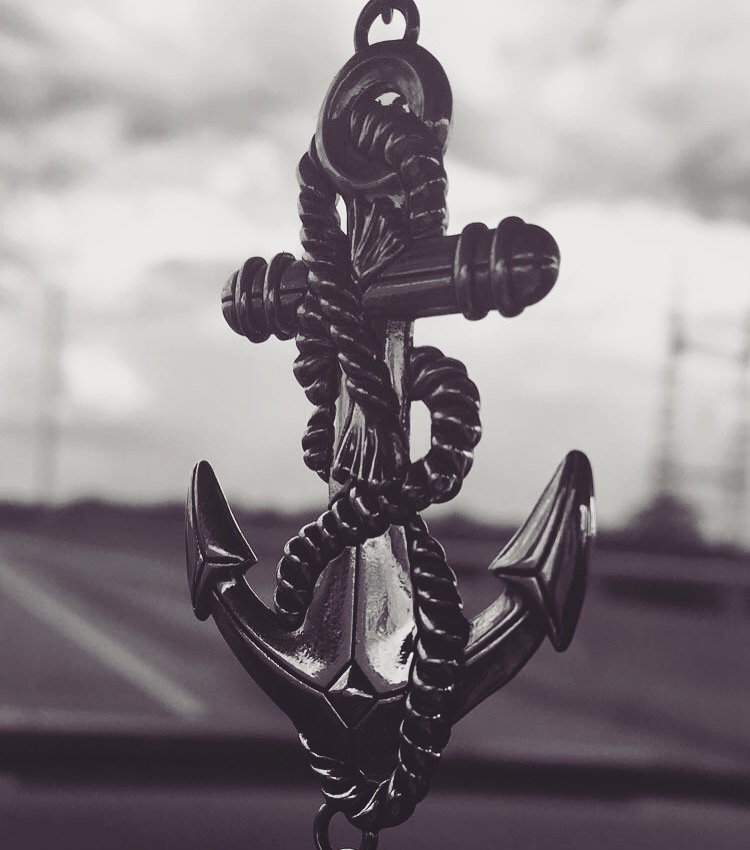