Help navigate through a 4.5 acre corn field that offers 1.5 miles of twists, turns and checkpoints! This is a great opportunity for team building and will end with some homemade ice cream & Italian ices which are made FRESH DAILY on the premises!

This event will be taken place on Sunday, Oct. 28th at Plasko’s Farm 670 Daniels Farm Rd in Trumbull.

We will be starting at 12:30 and will have plenty of time to go through the maze, eat some ice cream, and say hello to the critters on the farm!

Need help with transportation? We got you!

All we need from you is an RSVP and please invite/bring a friend!

You can RSVP to Ally @ Akernan@healthymindsct.org

Join in on the convo 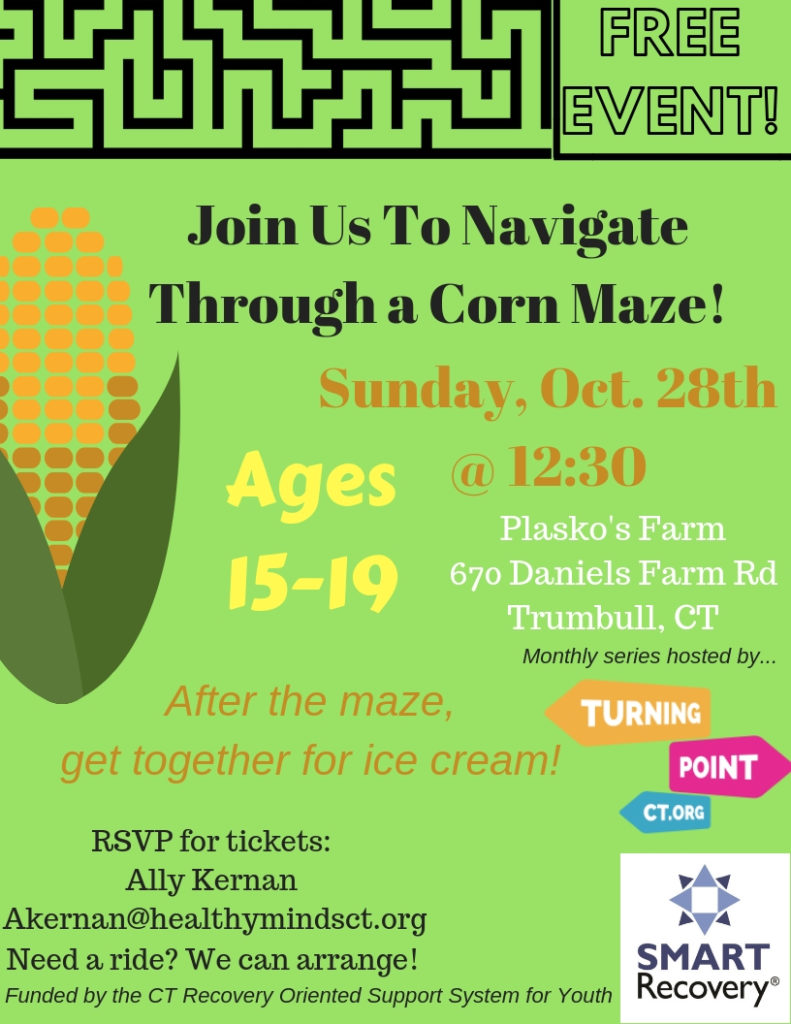 When Culture Holds You Back

Growing up, I was always astonished at how quickly my peers not only accepted, but embraced all that was handed to them: the music they were supposed to like because of their race, the values and morals that everyone in their neighborhood seemed to share, the clothing that everyone else wore, and general opinions on life situations. I RARELY ran into anyone who ever questioned this, the majority of people viewed anyone who didn’t follow their own lifestyle as a different kind of human being. Unfortunately, the culture I grew up around is detrimental to personal growth, there is not much value placed on education, marijuana is part of the lifestyle, and being unambitious, sometimes even lying to receive and stay on government support is considered the norm.

I can keep going on with how this culture is destructive on an individual level. A huge emphasis is placed on gender roles, men are supposed to be strong and unemotional, woman are supposed to be feminine and want to start a family, and anyone who strays from these ideals is considered a social deviant. It’s perfectly common to start a family at a very young age, jeopardizing the ability to make significant progress in one’s personal life. If a father figure isn’t in the picture, no one blinks an eye, in fact, it’s almost expected.

And there’s plenty of things that I only know vaguely about because I made it a point to stay away from, like the gang activity that would occur not only in my neighborhood but in the very building I lived in. And the drug issue- I’ve had people overdose and die in the hallways where I lived. I’d leave my apartment to find human piss in the stairwell.

Now I’m just ranting, but you get the point. These are not ideal living conditions. So my question is, how do we better a culture that is not self aware? How do we tell the children that there is a different way to do things, that you should and can go to college, that they are capable and they DESERVE opportunities and a chance for a different life?

This is a long post, but the first of many. I plan on writing more about this topic because it is something that I feel very passionate about, and I see all of these issues and I want change. Hood culture is the root to many issues in America at the moment, and not many seem to be aware of this or willing to speak on the subject. Nothing’s going to change if we don’t talk about it.