I was born into a family of 15 in Jeremie, Haiti. I was born with a ten-pound tumor on my lower back, and a pretty slim chance to live. My biological mother was spotted holding me, wrapped up in a blanket, at a farmer’s market in Port-au-Prince. She was approached by the sisters of Mother Teresa and informed of my medical condition. Being overwhelmed and frightened by this news, she fled the farmers market with me.

Fast forward to four months later, the same sisters of Mother Teresa again spotted my mother in the same farmer’s market. After hours of convincing, it was then when my mother decided to give me up, so I was able to receive the proper medical attention that I required. Arrangements were made for me to come to the United States, receive the surgery, then return to Haiti. It was then made very clear that if I returned back to Haiti after the surgery, I would be at higher risk of infection. My biological mother made the selfless decision to give me up for adoption.

On the 19th of September in 1993, I was born into this world. December 23rd 1994, when my adoption was finalized, is the day when my life really started. I was adopted into a family of 12, with four of my siblings being adopted from Honduras. We lived in the central part of Connecticut for most of my childhood years. As ignorant as this may sound, I did not know I was adopted until I was about 6 years old. That is when I mentally took note of others treating me poorly because of the way I looked, and on top of my appearance, I had a math disability & ADHD, so I was looked at as an easy target.

I can remember being bullied by other students and even teachers. I was told I was stupid, laughed at for my coarse hair, told that I was ugly, that I was too dark, the list goes on. I remember coming home from play dates and literally trying to scrub the black off my body. I wanted to fit in so badly, I wanted to be accepted. I used to dread the summertime, because I knew that my skin would tan and I wanted to feel normal without realizing that was my normal.

Regardless of my parents reminding me of my unique beauty on a daily basis, I sought validation to be identified as  beautiful by social “norms”.  Norms that strangle society on an everyday basis. As mentioned, I was adopted into a large diverse family with me being the only African American. I found it hard to understand why my hair was a different texture than my siblings. I did everything I could at the time to look like anyone other than myself. Let me continue by saying my adoptive parents are absolute saints, along with my godfather. I truly would not be where I am today if they chose not to take me in.

As I mentioned before, I had and still do have a math disability so being introduced to school was extremely tough for me. I can remember my parents doing everything in their power to make sure that I received the accommodations that I was entitled to, with little success. However, my parents found that it would be easier for me and my other adopted siblings to be taught at home. My mother homeschooled all five of us until we left for college. Even though learning the traditional way was tough for me, my mother made sure to make teaching and learning fun for us.

Now, my mother did most of the heavy-duty work, but she did have some help. We had a math teacher come on Mondays & Fridays, a science teacher come on Wednesdays and an Art teacher come Fridays, on top of my personal weekly visits from my OT, etc. Although my siblings and I were homeschooled, we were allowed to participate in town and even state sports. Regardless of my parents being told by several doctors that I would never walk on my own and be mentally disabled for my whole life.

Obviously, God had other plans for me, I played State soccer and basketball all through high school leading up to my departure for college, where I played soccer for a short time. Going to college was certainly an eye opener for me, emotionally it challenged me come to terms with who I currently was and who I longed to be. The fact that some of the other students appeared similar to me with similar  thoughts about struggles with their own self-identity was a bonus.

Education wise, it reminded me of the subjects I had trouble with in school, but challenged me to find another way that was instructed for my learning in the future. We were put into a situation to help build each other up and I loved it. I am still friends with that group of friends to this day. After I graduated from undergrad, I decided to take two years off and teach in a local school district as a substitute teacher. I decided to return to school for my master’s degree in counseling. Having completed my masters degree, I realized I wanted to trot into a different direction while keeping the same goal I started with in mind, which is helping others.

I’ve had so much help along the way both positive and negative, and I am forever grateful. Hardships are inevitable in life, but every experience you have is conditioning you for the future that you deserve. Days are going to drag, some may be easy and others not so much, but don’t give up.  If you’re tired rest, but don’t quit. Remember..“Faith works best when you don’t know.” 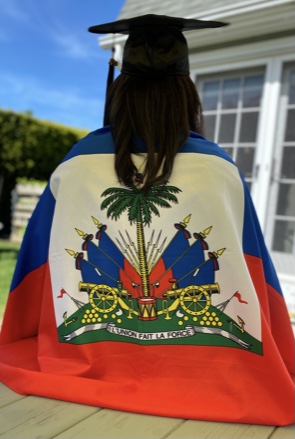