Recovery and anything related to it, is The Monkey’s predator. One of the predators is The Rubber Bracelet. I wear it around my right wrist. It lives on my arm at all times, occasionally moving to a sink counter while I shower. The reason it’s a predator is because it tries, and often succeeds at destroying and silencing The Monkey.

The Bracelet is a red and black rubber bracelet. It has white lettering that wrap around it that noticeable stands out. On one side of it says “We. I. Be.”. “We.” stands for “we are the solution”, “I.” stands for “I am the solution”, and “Be.”stands for “be the solution”. The other side of the bracelet says “Stop Heroin Now”. And that’s exactly what it does; it stops heroin right now

Stop Heroin Now is a non-profit organization in West Bend, Wisconsin. It’s mission is to educate the community, individuals, and families about the disease of addiction, advocate for better services, and provide community-based assistance for reducing substance abuse. They work with both youth and adults. This type of thing makes The Monkey cringe when he hears about these places and trembles when he has to be in one.

Stop Heroin Now was started by a woman named Linda Lenz. Unfortunately, The Monkey has friends that live on others’ backs too. The worst part is that he sometimes gets his victory, which ends up being multiple victories with a common one being a mother. Linda lost her son to heroin. The Monkey was too loud and strong. It’s a devestating murder in my eyes. However, even though these monkeys think they’ve won, they haven’t. Courageous people stand up against the monkeys and become allies for the humans. So this mother gathered up her courage and fought her son’s monkey by hurting living monkeys through the Stop Heroin Now foundation. They provide funding services for addiction and recovery support. Take that Monkey.

I met The Rubber Bracelet at Connecticut Community for Addiction Recovery, also known as “CCAR”, Recovery Coach Academy, where you can start the process of becoming a Recovery Coach. My classmate was a woman from the organization who was wearing it. When I laid eyes on The Bracelet, I instantly fell in love. She gave me one and I never expected the bond to be so tight.

The moment I slipped it on my wrist, The Monkey was furious. He demanded that we are not allowed to have roommates and that I couldn’t allow The Bracelet to move in. He screamed out reasons why The Bracelet wasn’t allowed. He said things like, “It’s going to itch and bother you. It’s not going to match your style. You can’t match that with anything”. But remember, The Monkey is a liar! So I disobeyed him and welcomed The Bracelet to its new home. The Bracelet gave me a sense of comfort as it hugged around my wrist.

That was the first time The Monkey made a stink about The Bracelet. One day The Monkey was extra loud and it sent many triggers my way. Triggers are one of his attack mechanisms. However, this time I felt like I had an extra suit of armour; the Bracelet. I stared at this red and black band. I skimmed quickly at the white word that was looking right in my eyes saying, “Stop” . That was the only word I could visibly see clearly through my water filled eyes. I stopped the thoughts of relapse that The Monkey was singing in my ears and the sight of the Monkey dancing in my eyes. The Monkey doesn’t show me visions of needles and empty bags of heroin; he shows me the feeling I have when I’m not feeling pain and completely relaxed. That’s how The Monkey treats you. He shows you what he thinks is the good part of listening to him. This time he didn’t win. I squeezed tightly on the Bracelet and closed my eyes. As my eyes shut I pictured all the mother’s I’ve met and haven’t, that are hurting because of a monkey. I thought about the feeling of withdrawal while being on a detox center floor. I thought about the consequences I had of disobeying the law, then I slowly bowed my head and said a prayer.

I didn’t use heroin that day which continued to more days. I paid very close attention to The Bracelet and the triggers went away. The Monkey was silenced. ALLY 1, MONKEY 0.

I was amazed by this method of avoiding a relapsed. I told others about my experience and over 80 people wanted a bracelet. Several young adults I know rely on their bracelet to fight their triggers and silence their monkeys. I couldn’t believe I wasn’t alone again in this thing called recovery. ALLY 2, MONKEY 0. 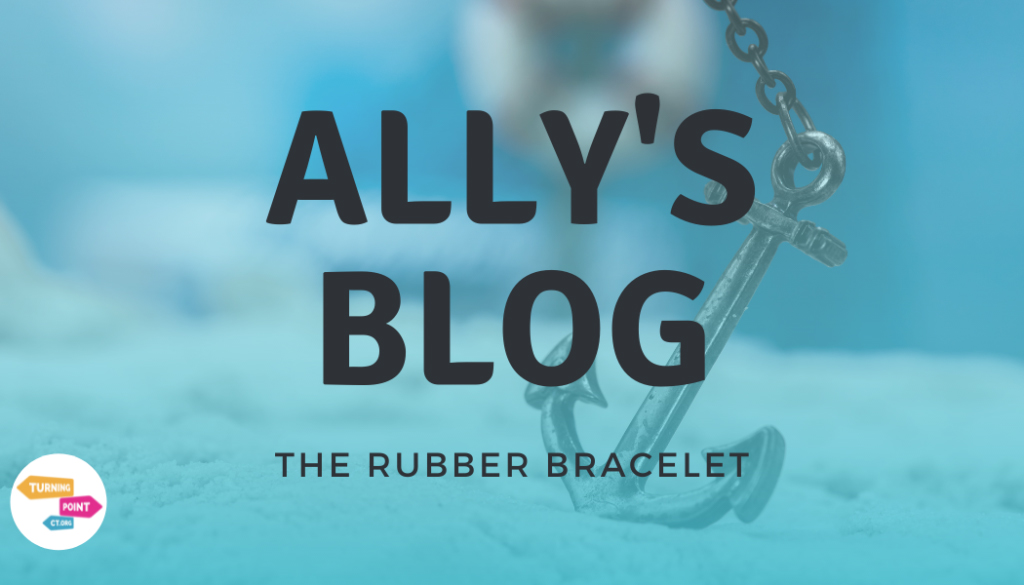 One Reply to “The Rubber Bracelet”