“An intense cold swept over them all. Harry felt his own breath catch in his chest. The cold went deeper than his skin. It was inside his chest, it was inside his very heart. . . .
Harry’s eyes rolled up into his head. He couldn’t see. He was drowning in cold. There was a rushing in his ears as though of water. He was being dragged downward, the roaring growing louder . . .
And then, from far away, he heard screaming, terrible, terrified, pleading screams. He wanted to help whoever it was, he tried to move his arms, but couldn’t . . . a thick white fog was swirling around him, inside him —” Harry Potter and the Prisoner of Azkaban

This is the piece of magic that changed my life. I read Harry Potter for the first time when I was 18 years old. When I arrived at this description in my reading, for the first time, I found that someone understood how I was feeling. This passage describes what happens to Harry when he comes across a Dementor. For those of you who aren’t as Harry Potter obsessed as I am: a Dementor can be described as “..the foulest creatures that walk this earth. They infest the darkest, filthiest places, they glory in decay and despair, they drain peace, hope, and happiness out of the air around them. Even Muggles feel their presence, though they can’t see them. Get too near a Dementor and every good feeling, every happy memory will be sucked out of you. If it can, the Dementor will feed on you long enough to reduce you to something like itself — soul-less and evil. You’ll be left with nothing but the worst experiences of your life.” JK Rowling, Harry Potter and the Prisoner of Azkaban

Before this point, in my 18 years of life, I’d never been able to put into words how my depression made me feel. Finally, there was someone who knew how I felt. Finally, I wasn’t alone. Finally, I was able to find the magic that I was so cleverly hiding within myself.

The only way to combat a Dementor attack is with a Patronus Charm. “As a pure, protective magical concentration of happiness and hope (the recollection of a single talisman memory is essential in its creation) it is the only spell effective against Dementors.” JK Rowling

In order to produce a Patronus charm, the user must think of their happiness and most wonderful memory with all of their heart. The incantation for a Patronus is

“I await a guardian.” 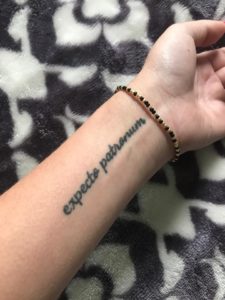